White House clash with Pelosi over Taiwan spills into the open 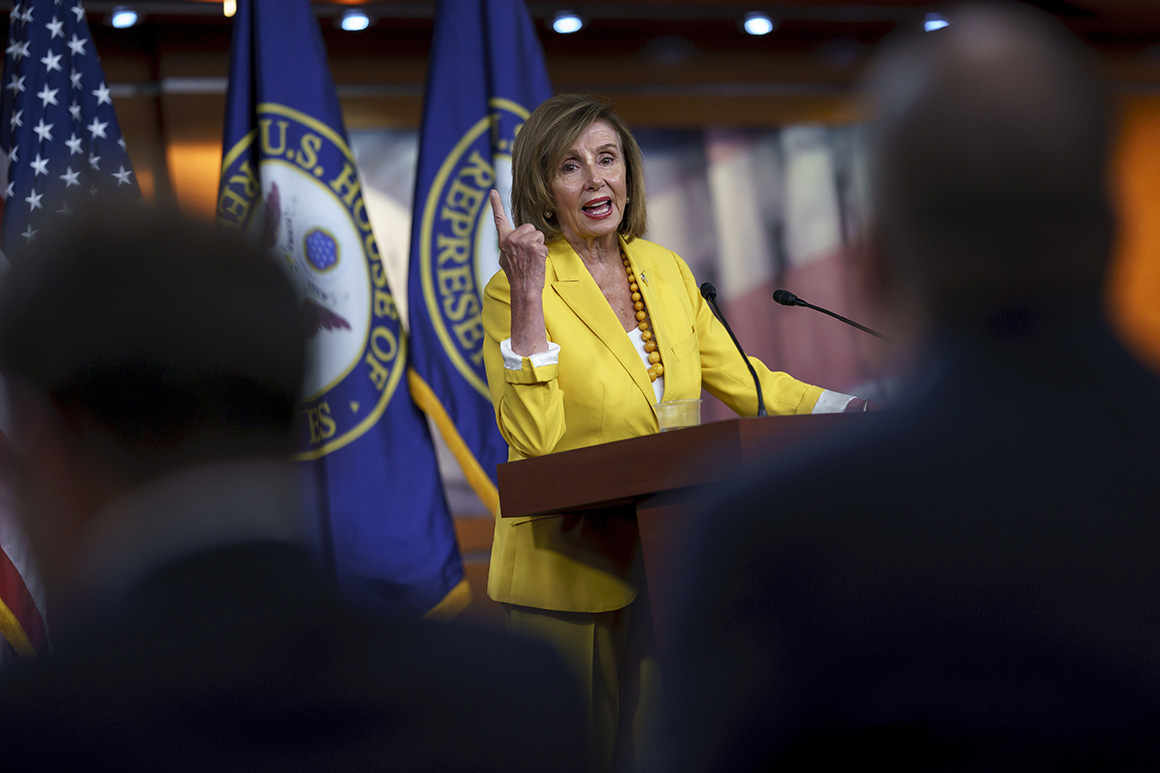 The Biden administration’s dispute with Speaker Nancy Pelosi over her planned trip to Taiwan next month spilled into public view this week when the president himself asserted that the military “thinks it’s not a good idea right now.”

Behind the scenes, White House and Defense Department officials have already been quietly relaying the risks of a potential trip to Pelosi’s office, according to three people with knowledge of the discussions. But since news of the trip emerged on Tuesday, the president’s public comments have ramped up pressure on the speaker to address those concerns.

Inside the Pentagon, officials believe the trip could increase tensions in the region as Beijing ratchets up rhetoric and flexes its muscles in the South China Sea. Pelosi is planning to use a military aircraft to fly to the island, which is standard for congressional delegations. But to the Chinese, “it looks like a military operation,” said one U.S. official, speaking on condition of anonymity to discuss a sensitive topic.

“The military thinks it’s not a good idea right now,” President Joe Biden told reporters on Wednesday when asked about Pelosi’s travel. “But I don’t know what the status of it is.”

After initially declining to comment on Biden’s remarks during her press conference on Thursday, Pelosi suggested that the president’s comments stem from the military being “afraid our plane would get shot down, or something like that, by the Chinese.” While not confirming the trip, she added that she has not heard that directly from Biden.

Pelosi also pushed back on the notion that her trip would be interpreted by the Chinese as a provocation.

“It’s important for us to show support for Taiwan,” she said. “None of us have ever said we’re for independence when it comes to Taiwan. That’s up to Taiwan to decide.”

As the Biden administration raises concerns about the trip, Republicans are backing up Pelosi, noting that she has a long track record of pushing back against China.

“I don’t always agree with her, but on this one I applaud it,” Rep. Michael McCaul of Texas, the top Republican on the House Foreign Affairs Committee, said in an interview. “It’s important that we show up in Taiwan and demonstrate to China that we are supportive. That’s a very strong statement for a speaker to go to Taiwan.”

But Beijing on Thursday made an explicit threat to retaliate with “forceful measures” if Pelosi goes ahead with the trip, which was initially planned for April but was canceled after the speaker tested positive for Covid-19.

“If the U.S. insists on going its own way, China will take forceful measures to resolutely respond and counter it, and we will do what we say,” said Chinese Foreign Ministry spokesperson Wang Wenbin.

Experts say the U.S. should take Chinese officials at their word. Kori Schake, director of foreign and defense policy at the conservative American Enterprise Institute, said that given all the factors in play, “the Chinese may do more than just complain” if Pelosi goes ahead with the trip.

“This could be really consequential,” she said.

An administration official said officials “provide the speaker with information and context that we believe is important for her to have before she travels overseas. She makes her own decisions.”

A spokesperson for Joint Chiefs Chair Gen. Mark Milley declined to comment on Pelosi’s trip, but similarly noted that the general typically provides “facts” to decision-makers.

“Normally when the chairman briefs any decision-maker, he discusses facts bearing on the problem, intelligence related to the mission, the logistics, and the military requirements to conduct the mission,” Col. Dave Butler said.

News of the planned visit comes as DoD officials are increasingly alarmed at the uptick of Chinese military aggression in the Pacific. In one incident, a Chinese fighter jet buzzed a U.S. special operations C-130 aircraft in June, POLITICO reported. In recent months, Chinese ships and warplanes have also harassed Australian and Canadian surveillance planes.

Meanwhile, the U.S. Navy kicked off the world’s largest maritime exercises off the coast of Hawaii on June 29. The Rim of the Pacific exercise, which will run through Aug. 4, involves 26 countries, dozens of warships and aircraft and tens of thousands of personnel training together in and around Hawaii and southern California.

Biden is expected to speak with his Chinese counterpart, President Xi Jinping, by the end of the month, the U.S. president said Wednesday.

But Schake argued that Beijing’s increased aggression is in part due to Biden’s “loose” statements about U.S. obligations to defend Taiwan in the event of an invasion.

“The president three separate times has mistakenly said the U.S. has an obligation to defend Taiwan, stripping away the context of the One China policy,” Schake said. “This potentially leaves the Taiwanese in a terrible place of us having a declaratory policy that the president then won’t back up with military force.”

Republican lawmakers see the Biden-Pelosi row as an example of the White House’s misguided fear of provoking an adversary. GOP lawmakers have slammed Biden for not sending more advanced weapons to Ukraine, for example, out of fear that it would prompt a belligerent response from Russia.

In a brief interview Thursday, Senate Minority Leader Mitch McConnell said it was important for Congress to pass a defense policy bill before the end of the year that “meets the challenge” of China’s long-term threats to U.S. national security.

“I have no criticism of the speaker trying to make this trip,” McConnell said. “But the real test is the [defense policy] bill and revising upward the request by the administration. … That’s the real message to the Chinese.”

Pelosi’s office has not confirmed the trip and declined to offer a comment on Biden’s remarks.

“We do not confirm or deny international travel in advance due to longstanding security protocols,” a spokesperson said.

Washington has ramped up support for Taipei in recent years, with both the Biden and Trump administrations increasing arms sales and sending top current and former officials to the island.

“The president has accidentally or on purpose multiple times made it clear that we are committed to defending Taiwan against inappropriate action by China,” said Mark Montgomery, former policy director for the Senate Armed Services Committee and a retired Navy rear admiral. “It makes perfect sense for the speaker of the House to visit there and see for herself.”

“China should understand that the U.S. reserves the right to speak to its partners in a manner they see fit,” he said.