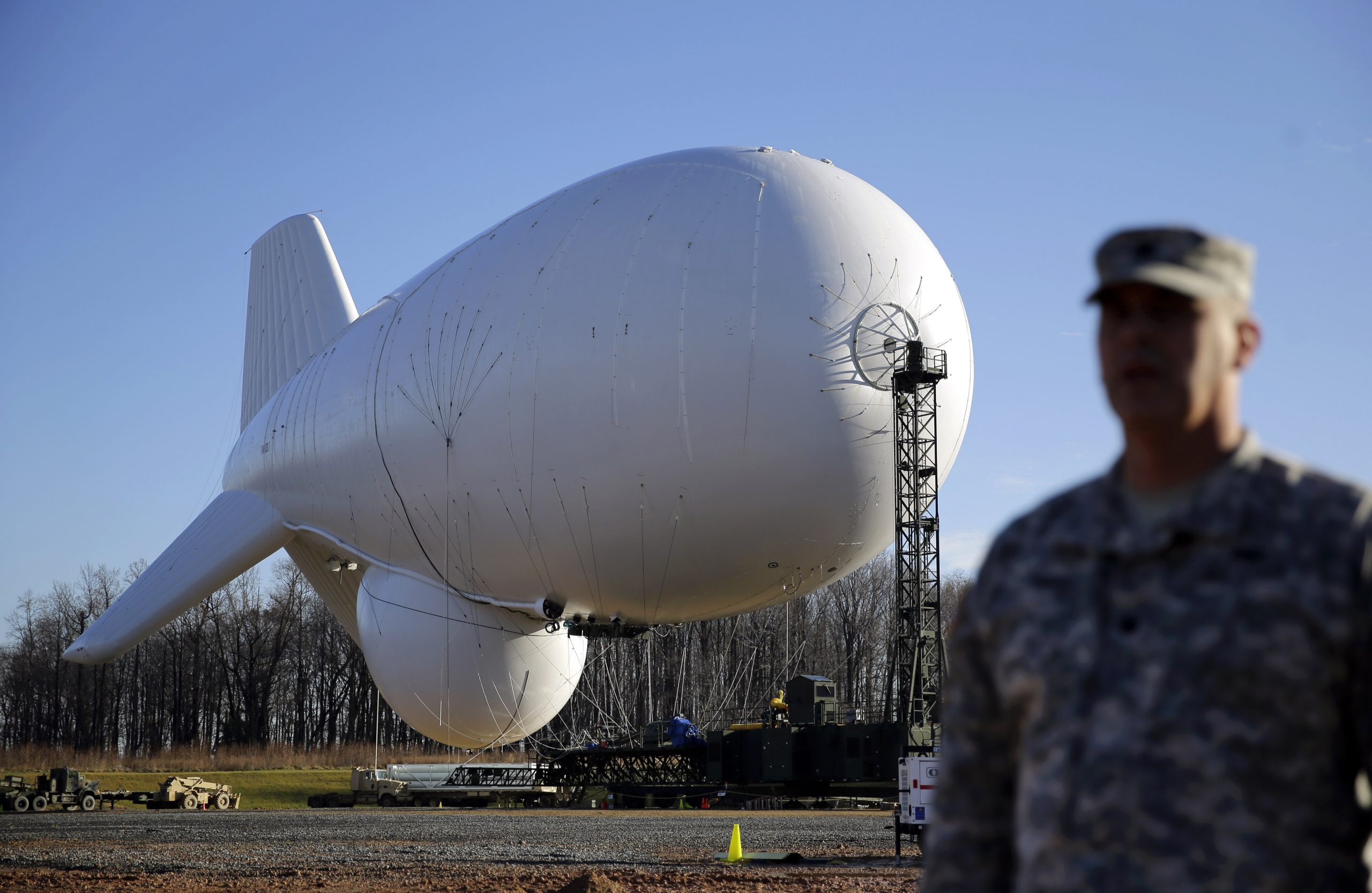 “If we can just grow up and get over our hang-ups about the JLENS event, the future can be bright for dirigibles, balloons and aerostats,” the Center of Strategic and International Studies’ Tom Karako said. | Patrick Semansky/AP Photo

The Pentagon is working on a new plan to rise above competition from China and Russia: balloons.

The high-altitude inflatables, flying at between 60,000 and 90,000 feet, would be added to the Pentagon’s extensive surveillance network and could eventually be used to track hypersonic weapons.

The idea may sound like science fiction, but Pentagon budget documents signal the technology is moving from DoD’s scientific community to the military services.

“High or very high-altitude platforms have a lot of benefit for their endurance on station, maneuverability and also flexibility for multiple payloads,” said Tom Karako, senior fellow for the International Security Program and Missile Defense Project director at the Center for Strategic and International Studies.

The Pentagon continues to invest in these projects because the military could use the balloons for various missions.

Over the past two years, the Pentagon has spent about $3.8 million on balloon projects, and plans to spend $27.1 million in fiscal year 2023 to continue work on multiple efforts, according to budget documents.

Meanwhile, the Pentagon is working on its own hypersonic weapons program, despite Wednesday’s failure of the latest test.

A bright spot for the U.S. is the balloons may help track and deter hypersonic weapons being developed by China and Russia.

China surprised the Pentagon in August by testing a nuclear-capable hypersonic missile, which narrowly missed its target by roughly two dozen miles.

Russia began ramping up hypersonic weapons development in response to the U.S. withdrawal from the Anti-Ballistic Missile Treaty in 2002. The Russian government claimed to fire a hypersonic missile in an attack on Ukraine in March, marking its first use in combat.

That’s one way the balloons could be useful — augmenting expensive satellites in tracking the missiles. The teardrop-shaped balloons harvest complex data and navigate using AI algorithms.

The Covert Long-Dwell Stratospheric Architecture (COLD STAR), a project designed to locate drug traffickers, was widely reported in 2019. At the time, the Pentagon launched 25 surveillance balloons from South Dakota as part of a demonstration.

The Pentagon confirmed to POLITICO that the COLD STAR program has transitioned to the services. DoD would not disclose details about the effort because it is classified.

Another initiative aims to tie all the technology together. The Pentagon is conducting demonstrations to evaluate how to incorporate high-altitude balloons and commercial satellites in an attack, known as the “kill chain.”

“They can be trucks for any number of platforms, whether it be communication and datalink nodes, ISR, tracking air and missile threats, or even various weapons — and without the predictable orbits of satellites,” Karako said.

DoD is also working to use drones equipped with “stratospheric payloads” along with balloons to track moving ground targets, provide communications and intercept electronic signals. The idea is for the technology to transition to the Army and U.S. Special Operations Command, according to budget documents.

Finding other ways to track ground targets is a priority for the Pentagon as the Air Force retires airborne surveillance aircraft.

Not your average balloon

Raven Aerostar, a division of Raven Industries, produces the balloons. Raven said they consist of a flight control unit, powered by batteries that are charged using renewable solar panels. They also have a payload electronics package that controls flight safety, navigation and communications, Russell Van Der Werff, engineering director at Raven Aerostar, said in an interview.

Wind currents allow the balloon to float along a desired flight path, and the company takes advantage of different wind speeds and directions to move the balloon to the target area.

But that’s not all. Raven Aerostar uses a proprietary machine-learning algorithm that predicts wind directions and fuses incoming sensor data in real time, Van Der Werff said. The company also employs a software program to pilot and monitor its balloon fleet and has a mission operations center manned with trained flight engineers 24 hours a day, seven days a week, he added.

The balloons can supplement work performed by traditional aircraft and satellites, and stratospheric balloons can be built and launched at a fraction of the cost and time. For example, the cost to launch and operate balloons for weeks or months is in the hundreds of thousands of dollars, versus millions — or tens of millions — needed to launch and operate aircraft or satellites.

Not the first time

NASA was flying helium-filled stratospheric balloons as early as the 1950s, and the Army in recent years has experimented with these systems at lower altitudes.

The private sector is also investing in the balloon market. Alphabet deployed balloons in 2017 to provide mobile communications in Puerto Rico after Hurricane Maria.

In the mid-2010s, the Army was investing in a spy blimp program that it ultimately canceled in 2017. The effort is known as the Joint Land Attack Cruise Missile Elevated Netted Sensor System, or JLENS.

The blimp was tethered, unlike the high-altitude balloons, and designed to track boats, ground vehicles, drones and cruise missiles. The balloons DoD is using now are smaller, lighter and can fly considerably higher than the spy blimp.

Starting in 2015, the Army conducted a three-year exercise to determine whether to keep buying JLENS blimps from Raytheon. But the blimp broke free from its mooring station near Baltimore, flying for three hours and eventually landing near Moreland Township, Penn.

The Army decided to drop the program. JLENS cost nearly $2 billion to develop and was designed to deploy in U.S. Central Command.

“If we can just grow up and get over our hang-ups about the JLENS event, the future can be bright for dirigibles, balloons and aerostats,” Karako said.