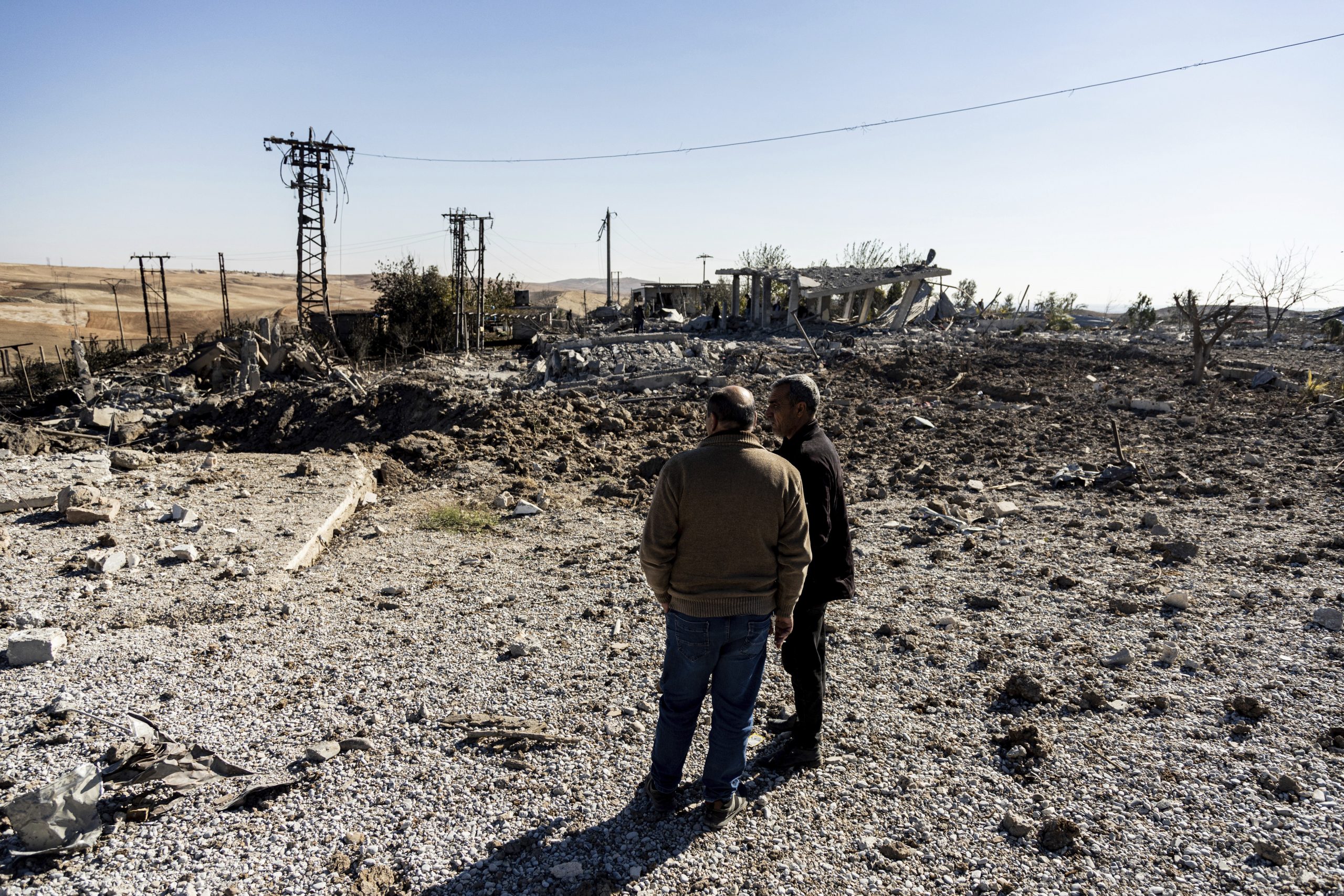 People look at a site damaged by Turkish airstrikes that hit an electricity station in Syria on Nov. 20, 2022. | Baderkhan Ahmad/AP Photo

Turkish airstrikes conducted this week in northern Syria posed a risk to American troops and personnel, according to a spokesperson for U.S. Central Command.

Turkey launched a series of deadly airstrikes across Iraq and northern Syria on Tuesday, in retaliation for last week’s bomb attack in Istanbul. Turkish warplanes struck bases of the Kurdistan Workers’ Party, or PKK, and the Syrian People’s Protection Units, or the YPG, Turkey’s Defense Ministry said in a statement.

The airstrikes came after a bomb exploded in Istanbul on Nov. 13, killing six people and wounding more than 80 others. Ankara blamed the attack on the PKK and its Syrian affiliate, also known as the Syrian Democratic Forces, but the Kurdish groups have denied involvement.

Among the Turkish targets this week was a base jointly manned by the Syrian Democratic Forces and the coalition to defeat the Islamic State, which includes American troops, according to Sinam Mohamad, the Syrian Democratic Council Representative to the United States. The attack killed two members of the SDF who are helping coalition forces fight ISIS, she wrote on Twitter.

The airstrikes posed a risk to American troops and personnel, Central Command spokesperson Col. Joe Buccino said in an email.

“We oppose any military action that destabilizes the situation in Syria,” Buccino wrote. “These actions threaten our shared goals, including the continued fight against ISIS to ensure the group can never resurge and threaten the region.”

Buccino declined to disclose the location of the base.

American officials are bracing for escalation in Syria. Turkish President Recep Tayyip Erdoğan said Tuesday that Turkey will soon launch a ground offensive with tanks and soldiers against the Kurdish militia.

“We have been bearing down on terrorists for a few days with our planes, cannons and guns,” Erdoğan said. “God willing, we will root out all of them as soon as possible, together with our tanks, our soldiers.”

Since the summer, U.S. officials have warned Turkey not to invade northern Syria, saying that such a move would be catastrophic for the counter-ISIS fight. Top Defense Department officials visited Turkey this year to convey that message.

“We continue to urge for de-escalation on all sides and in our conversations,” Pentagon spokesperson Sabrina Singh said Tuesday.

Gen. Mark Milley, Joint Chiefs chair, spoke by phone with his Turkish counterpart, Chief of the General Staff of the Turkish Armed Forces Gen. Yaşar Güler, on Wednesday, according to a readout by Milley’s spokesperson.

Turkey launched a large-scale aerial assault around midnight on Saturday, using 70 fighter jets and drones across north and east Syria, according to the Rojava Information Center, a news agency run by pro-Syrian Kurd activists. The strikes also targeted sites around Duhok, Sulaymaniyah and Shengal in Iraq.

Altogether, the strikes killed 11 civilians and wounded nine more, according to the report.

The possibility of a Turkish ground offensive is reminiscent of Operation Peace Spring in October 2019, when Ankara invaded northeastern Syria after then-President Donald Trump ordered American troops to withdraw from the region. More than 70 civilians in Syria and 20 in Turkey were killed, and more than 300,000 people were displaced.

A peace deal reached that month redrew the borders between Kurdish, Turkish and Russian-controlled areas of northern Syria.