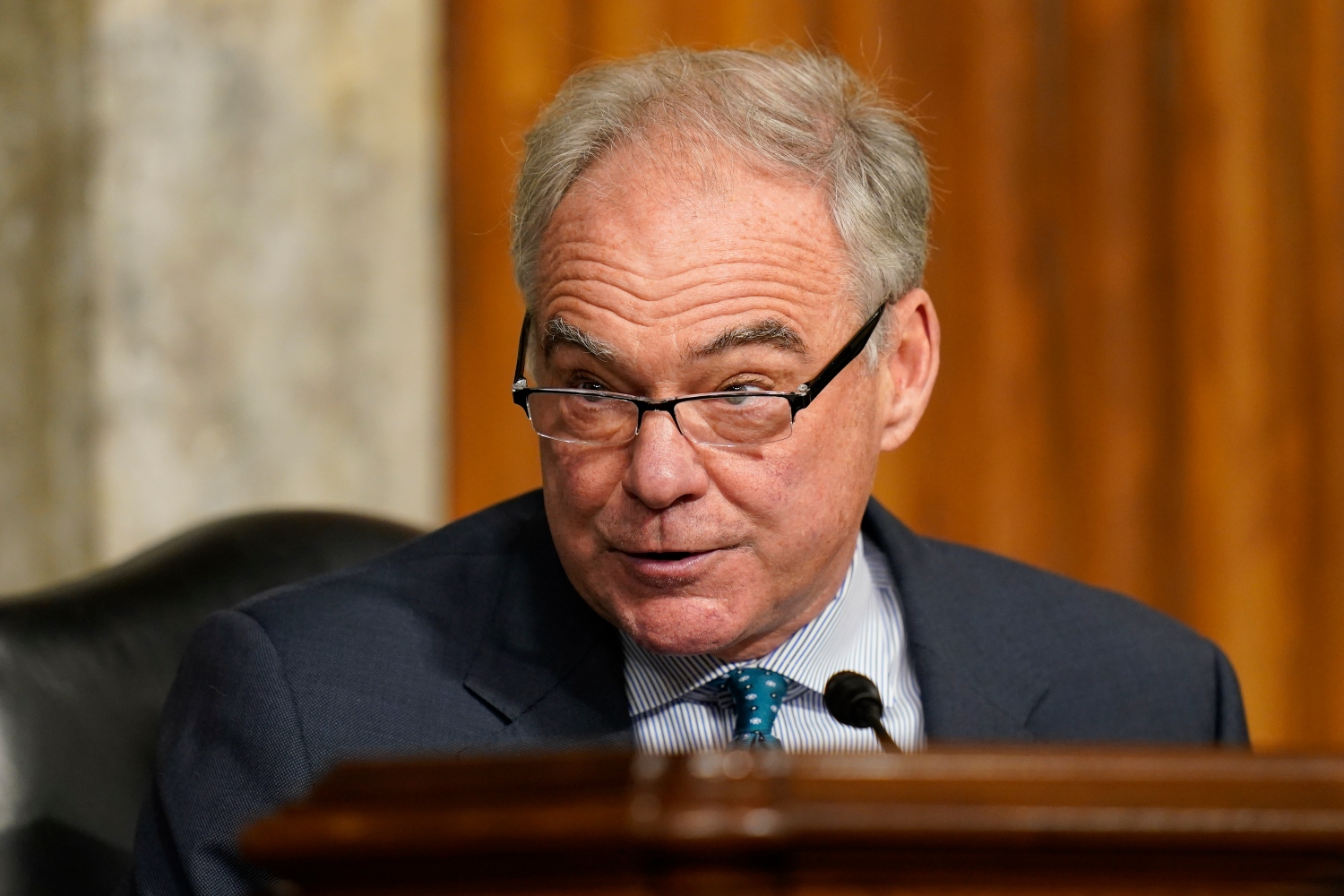 A push to repeal the 2002 Iraq War authorization, spearheaded by Sens. Tim Kaine (above) and Todd Young has garnered bipartisan support | Pool photo by Patrick Semansky

Advocates for reining in decades-old presidential war powers have their eyes on must-pass defense legislation as a vessel for finally achieving their goal in the Senate.

A push to repeal the 2002 Iraq War authorization, spearheaded by Sens. Tim Kaine (D-Va.) and Todd Young (R-Ind.), has garnered bipartisan support. The move, which is backed by President Joe Biden, has yet to come up for a vote despite a pledge last year by Majority Leader Chuck Schumer to do so.

That has senators eyeing adding the proposal to the Senate’s version of the National Defense Authorization Act to get the job done, mirroring a move by the House last month.

“I’ve talked with Senator Schumer about it [and] he had promised a floor vote on this at some point,” Kaine told POLITICO. “He obviously wants to do it in a way that does not chew up the maximum amount of time, so we’re trying to figure that out.”

Kaine said tacking the repeal onto the defense policy bill or holding a standalone vote in connection with the 20th anniversary of the vote that preceded the U.S. invasion that toppled Saddam Hussein’s regime are possibilities.

But with control of the Senate a tossup headed into the midterms, advocates are staring down dwindling opportunities to pass something as Democrats scramble to enact their last legislative priorities. The defense bill is one of the few major pieces of legislation to reliably become law each year, making it a magnet for other efforts.

A war powers overhaul would likely face much longer odds in a GOP-led Senate. Minority Leader Mitch McConnell has opposed efforts to take the 2002 authorization off the books, calling the move “reckless” when the House voted to do so last year.

The House voted to repeal several old war powers — the 2002 Iraq War authorization, a 1991 measure enacted for the Gulf War and a Cold War-era 1957 resolution for military force in the Middle East — as part of its own defense bill with little controversy in July.

A key problem for the Senate is finding the time to do the vote. Congress just kicked off its long summer recess and will be out of session much of the next several months with elections looming. Ahead of the recess, Senate Democrats had been preoccupied passing their top priority: a party-line tax, climate and health care package, which was finally approved on Sunday.

A spokesperson for Schumer did not immediately respond to a request for comment on the Democratic leaders’ plans for a vote. Schumer pressed for a vote on Kaine and Young’s proposal as part of the Senate defense bill last fall, but a vote was scuttled by a partisan dispute over amendments.

Young said he last huddled with Kaine on their war powers proposal roughly a month ago, but agreed that the defense bill may be the most viable target for attaching the AUMF repeal.

“I’ve been reassured by Senator Kaine that we will likely have a vote between now and year’s end,” Young said in a brief interview. “I agree that the NDAA is the most logical vehicle, but frankly we’ll hitch a ride wherever we can catch it. It’s a busy calendar.”

Critics of the broad presidential war powers granted in the wake of 9/11 want to pull back the Iraq War authorization and other old laws as a down payment on a larger, and much more politically fraught, overhaul that restores lawmakers’ authority to authorize military force.

“The further you go back, the more absurd leaving these zombie authorizations on the book looks,” Young said.

Keeping old authorizations on the books, advocates contend, makes them ripe for abuse by the executive branch. Former President Donald Trump cited the 2002 AUMF as part of his administration’s legal justification for the 2020 killing of Iranian military commander Qassem Soleimani in Iraq, a move that revived debate on Capitol Hill over presidential war powers.

Kaine and Young have pushed standalone legislation to repeal the Iraq War resolution as well as the 1991 Gulf War authorization, which cleared the Senate Foreign Relations Committee with bipartisan support last August. The measure would likely garner the requisite 60 votes to advance on the Senate floor.

The House has voted several times to roll back aging war powers, including in annual defense appropriations and policy legislation as well as in standalone bills that passed last year.

Finding floor time has already proved difficult. The response to Russia’s invasion of Ukraine has engulfed foreign policy deliberations. The waning weeks of July and the early days of August were crowded by efforts to cement a reconciliation deal, ratify a treaty to admit Sweden and Finland to the NATO alliance and muscle through an expansion of veterans health care stemming from burn pit exposure.

“The last time we talked about it he said, ‘I really want to do it, I just got to figure out a way so it doesn’t block a whole lot of other things from happening,’” Kaine said of his discussions with Schumer.

That may make the broader defense bill an attractive option, as the House bill already includes the repeal. But it’s not without risk after the Senate failed to pass its own bill last year.

Senate Armed Services Chair Jack Reed (D-R.I.) said incorporating the repeal in the NDAA “makes some sense,” though no definite plans have been made.

Senators will have to hustle to clear their own defense bill, regardless of the war powers debate.

Reed is aiming to pass his legislation in a brief window in September when the Congress returns from its summer recess. Even then, the NDAA may compete with efforts to prevent a government shutdown.

Already, Senate Republicans are hammering Schumer to quickly bring a defense bill to the floor. The Senate failed to pass its own bill late last year after Republicans blocked the measure in a dispute over amendment votes, leaving House and Senate Armed Services leaders to work out a separate compromise.