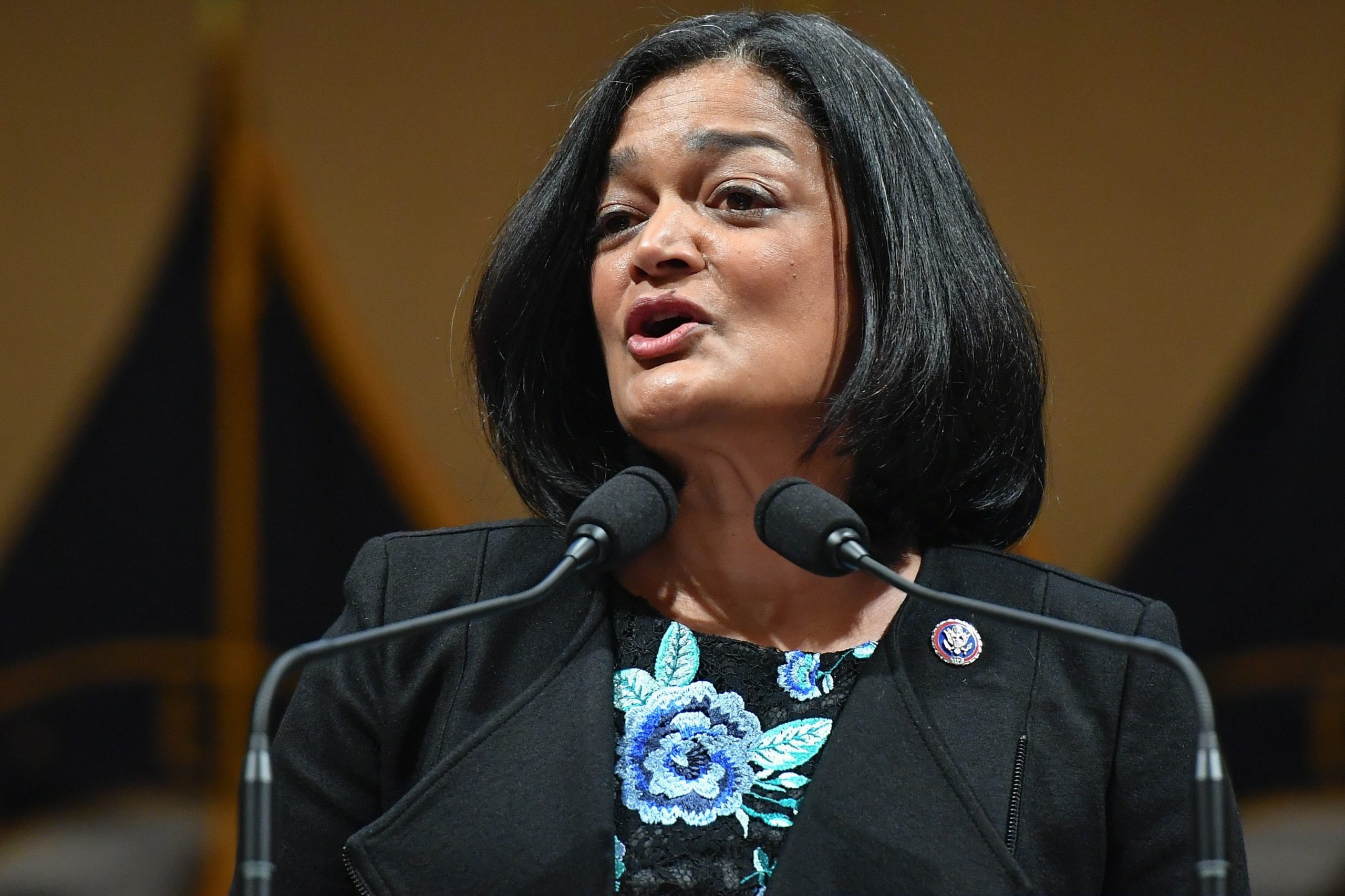 Progressive Democrats are eyeing must-pass defense legislation as the next battleground to protect abortion rights following the Supreme Court’s reversal of Roe v. Wade, a longshot move that reflects the fierce push within the party to fight for abortion access.

The issue will come to a head when the House returns next week, as Democratic leaders decide whether to consider a progressive push to the annual defense legislation that would roll back restrictions on performing abortions at military medical facilities as well as limits on Pentagon funding for the procedures.

The amendment, offered by Congressional Progressive Caucus Chair Pramila Jayapal (D-Wash.) and Reps. Jackie Speier (D-Calif.) and Anthony Brown (D-Md.), comes amid intense pressure for President Joe Biden and Democrats to do something to preserve access to abortion in the wake of the high court’s ruling.

With many military bases in states that have banned the procedure or likely will soon, bolstering abortion access in the ranks would be a likely objective for Democrats, many of whom have already pressed Defense Secretary Lloyd Austin to remove barriers to troops’ reproductive rights.

Rank-and-file Democrats, particularly liberals, are vowing to search for all possible leverage to push abortion protections on the floor. But in a sharply divided Congress ruled by the filibuster, those members know their best chance is to seize on legislation that needs to pass every year, such as the National Defense Authorization Act, in the hopes of forcing Republicans’ hands. Even then, it’s a last-ditch effort that few Democrats expect will work.

For lawmakers and other advocates who favor new protections, barriers to reproductive care are a matter of military readiness that impact the capacity of women to serve in the military.

Escobar, a House Armed Services member whose El Paso-based district includes the Army’s Fort Bliss, said her office was “inundated with calls from women service members, who said, ‘I’m not a Texas resident but I live here. What if I need access?’” Abortions in the state were limited to within six weeks of conception, but the procedure was outlawed altogether after the Texas Supreme Court ruled the state can enforce a 1925 ban.

Jayapal and Speier’s amendment would roll back the limits on the use of Defense Department medical facilities and financing for abortions. The procedure, and funding for it, is currently limited to instances in which the life of the mother would be endangered or rape or incest is involved. The restrictions mean women often need to seek care at civilian facilities and pay out of pocket, and now many will need to obtain leave to travel to states where abortion is legal.

“Our office supports pursuing every avenue to strengthen abortion rights so anyone who wants an abortion can get one safely, including an NDAA amendment,” Jayapal’s office said in a statement.

A vote is far from a lock. The House Rules Committee, which sets the guardrails for floor debate, meets next week to determine which of the nearly 1,200 amendments filed, including Jayapal and Speier’s proposal, will receive votes. Democratic leaders could simply sidestep the issue altogether on a bill that needs some Republican votes to pass.

Democrats are already pushing the Pentagon to take steps on their own, without Congress, to protect access to abortions.

Ahead of the Supreme Court’s decision last month, Speier, who chairs the Armed Services panel that oversees military personnel issues, and Rep. Jason Crow (D-Colo.) led 79 Democrats in a letter urging Austin and Homeland Security Secretary Alejandro Mayorkas to expand policies to guard troops’ access to abortion. They called for the departments to standardize leave policies across the military services, enhance privacy protections and provide financial support to troops who need to travel to obtain an abortion.

Pentagon personnel chief Gil Cisneros acknowledged in a June 28 memo that the ruling “will have significant implications” for troops and their families, but said the Defense Department will continue to perform “covered abortions, consistent with federal law” where a mother’s life is endangered or instances of rape or incest. The Pentagon also lifted a ban on abortion-related websites within its computer networks.

Introducing the abortion debate into the defense policy bill could upend the bipartisan coalition that leaders typically rely on to get the legislation across the House floor.

Democrats’ narrow majority — and progressive lawmakers’ resistance to back a bill that would expand what they consider an already bloated Pentagon budget — means dozens of GOP votes are needed to pass the National Defense Authorization Act. Attaching abortion provisions could attract some progressives who are inclined to vote against what they see as a bloated Pentagon budget, but would also stoke Republican opposition that may imperil the bill’s chances.

House Armed Services Chair Adam Smith (D-Wash.) deferred on whether abortion access would become a contentious issue or if it should be added to the defense bill, saying he hadn’t seen the specific amendment yet as hundreds of proposals rolled in this week.

“There’s 1,200 amendments and we’re sifting through all of them to see how we’re going to be able to get the best bill possible, and also pass it,” Smith said in an interview. “That is a very complicated picture we’ve got to work on every year.”

Democratic leaders will have to balance competing political factions as they weigh which issues to press on the defense bill.

“It would be very different if we had a progressive wing of our caucus willing to vote for [the NDAA], but they don’t, so it affects our ability to pass it,” Speier told reporters last month.

The top House Armed Services Republican, Rep. Mike Rogers of Alabama, said he and Smith worked to keep “toxic” provisions out of the bill during the committee’s June markup. Lawmakers largely avoided an abortion debate just two days before the Supreme Court handed down its ruling, though Rogers said some Republicans wanted to offer more restrictive provisions.

“I kept some of my people from bringing some amendments that were going to be tough for [Democrats],” Rogers said. “If we started doing more restrictive things, then it would stir them up.”

“We want to make sure this bill gets done,” he added. “Putting poison pills in it’s going to make it hard for either side to vote for it.”

But some Republicans are pushing their own amendments to halt Democrats’ effort to protect reproductive care. Rep. Lauren Boebert (R-Colo.) proposed one that would bar the federal government from leasing federal property to abortion providers, and another from Rep. Scott Franklin (R-Fla.) would bar DoD from leasing land to organizations that perform abortions.

Republican leverage over defense legislation has been on display in the past two years, as defense hawks — with centrist Democrat support — have muscled through significant increases in Pentagon spending. This year’s bill authorizes a $37 billion increase above the level sought by the Biden administration.

Separately, Republicans are opposing defense spending legislation in the House that sticks with Biden’s Pentagon budget, but also includes abortion protections. That bill, approved last month by the House Appropriations Committee, effectively bars commanders from denying troops leave for seeking or helping others get an abortion.

The Service Women’s Action Network, an organization that advocates for current and former women in the military, argues the high court’s ruling will hurt troops’ ability to continue getting legal abortions within the civilian community due to DoD’s restrctions on performing the procedure.

Lory Manning, the group’s director of government relations, said she’s already seen some women make the decision not to have the procedure, due to the lack of existing access in some states.

“If you can’t afford to travel and pay for an abortion, what else are you going to do?” Manning said. “You have the baby.”

The network is also is pushing for the Department of Veterans Affairs to include coverage for abortions. VA health care does not currently offer abortion or counseling in any of its benefits packages.