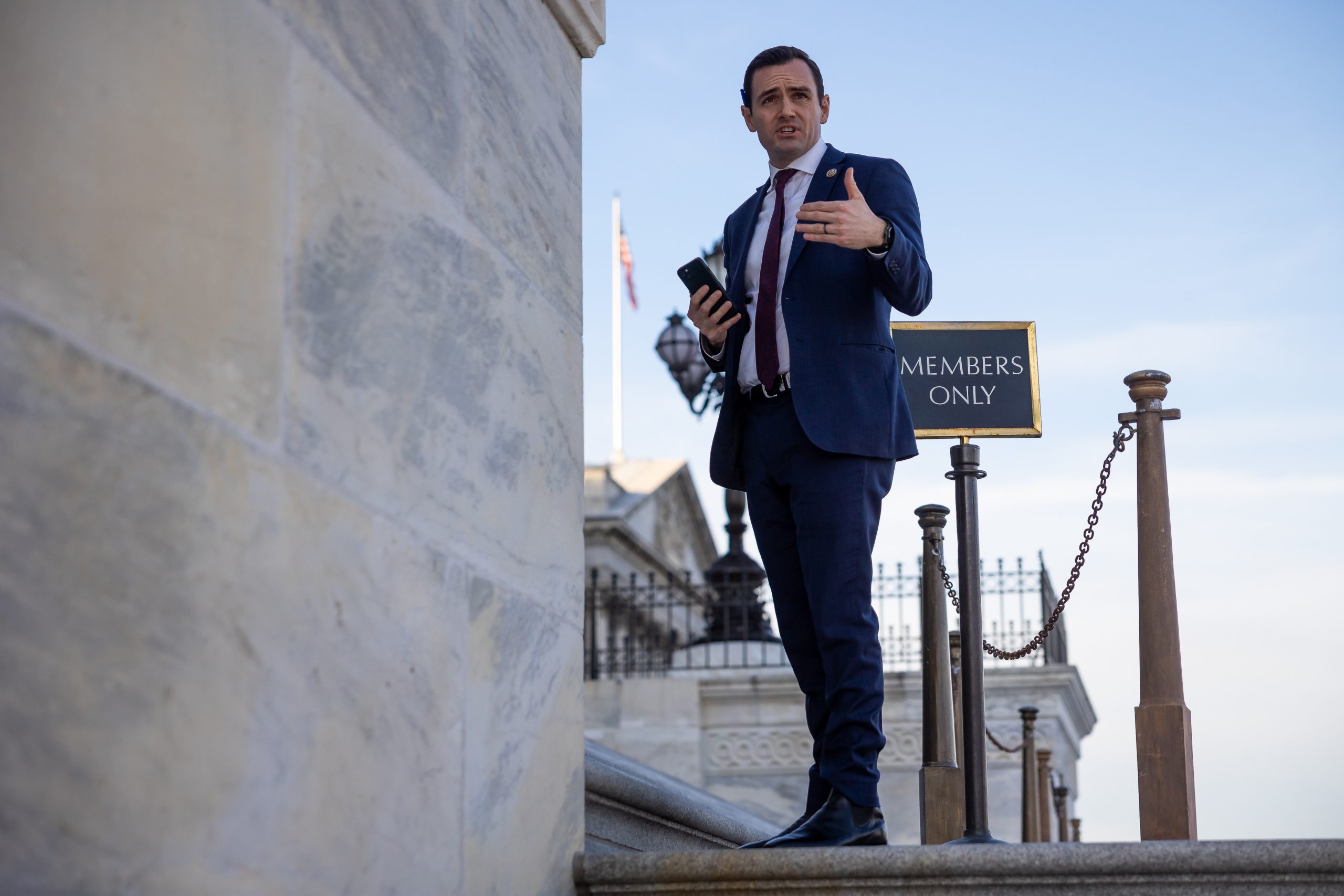 Rep. Mike Gallagher (R-Wis.) speaks with reporters as he arrives for a vote at the U.S. Capitol on Jan. 10, 2023. | Francis Chung/POLITICO

The House voted to establish a select committee to assess the myriad military, economic and technological challenges posed by China — kicking off an effort that was a major pillar of the Republican national security agenda.

Lawmakers voted 365-65 to set up the panel, which will be chaired by Wisconsin Rep. Mike Gallagher, a steadfast China hawk.

House Speaker Kevin McCarthy hailed the establishment of the panel. The resolution creating the committee was the second measure the Republican-led House passed, and McCarthy promised the new panel will help “win this economic competition” with Beijing after winning the speaker’s gavel last week.

“Here’s the good news: There is bipartisan consensus that the era of trusting communist China is over,” McCarthy said Tuesday on the House floor.

The new committee, which will last the length of this Congress but can be reupped, is the latest signal of growing bipartisan concern over China’s military might and deepening skepticism over trade with the world’s second-leading economy.

The Biden administration, like the Trump administration, has singled out China as the most significant long-term threat to U.S. security. Congress has approved significant increases in defense spending as the Pentagon looks to match a rapidly modernizing Chinese military and deter a possible invasion of Taiwan.

Lawmakers also authorized billions of dollars in new military aid for Taiwan this fiscal year amid growing concerns that Beijing could be rapidly acquiring the capability needed to invade the self-governing island.

Tensions have flared as China steps up provocative military drills in the waters around Taiwan. Beijing also stepped up military activity following a visit last year by then-Speaker Nancy Pelosi, the first by a House speaker in more than two decades.

“It is time to understand the urgency of the threat. It is time to reclaim our economic independence in key areas,” Gallagher said. “The select committee will expose the [Chinese Communist Party]’s coordinated whole-of-society strategy to undermine American leadership and American sovereignty while working on a bipartisan basis … to identify long-overdue, commonsense approaches to counter CCP aggression.”

But the tough-on-China panel also comes as Republicans weigh deep spending cuts that some defense hawks are concerned could hit the Pentagon. Republicans successfully pushed for billions more than President Joe Biden requested for defense, in part to respond to Beijing. Continued military spending hikes are needed, they argue, to keep pace with Chinese modernization.

Democrats have not yet named members to the panel, but multiple lawmakers have indicated an interest in being the ranking member, including Michigan Rep. Elissa Slotkin.

“Obviously as a national security person and someone who’s been talking a lot about some of the economic security issues related to China, I’m certainly interested in the committee,” Slotkin said outside the House chamber ahead of the vote. “I’m interested, especially in the wake of Covid, in really having a full, holistic look at Chinese competition and our economic security, and our national security.”

That would please Gallagher’s office and other Republicans who view the moderate former CIA analyst as an honest broker and serious policymaker. It would also give the Democrat a high-profile, bipartisan role to tout if she runs for the Senate seat to be vacated by Michigan Sen. Debbie Stabenow next year. Slotkin said the committee assignment is a “separate conversation” from her decision on whether to run, which she is still considering.

Other lawmakers interested in the role include two members of the Congressional Progressive Caucus — Reps. Ro Khanna (Calif.) and Andy Kim (N.J.). CPC Chair Pramila Jayapal (Wash.), who voted against the establishment of the select committee, declined to endorse any lawmaker for the ranking member role, but said that anyone Democratic leaders appoint should “stand up for our values” and make sure “this doesn’t go in an extreme Republican direction.”

All 65 lawmakers voting against the panel were Democrats.

Rep. Jim McGovern, the top Democrat on the House Rules Committee, told his colleagues he would vote for the new panel — albeit with some reservations.

“I said that they should vote the way they want to, but I’m going to vote for it,” McGovern said he told Democrats in a caucus meeting Tuesday morning. “I have lots of concerns about how [Republicans] demagogue the issue and promote conspiracy theories and xenophobia. The way the bill is written, I have a few suggestions on how they might write it differently. But I don’t see any reason to vote against it.”

McCarthy responded during the debate that the effort “is not a partisan committee” and said his goal is “that we speak with one voice” on meeting challenges posed by China.

Once established, the China commission will aim to balance a focus on short-term military readiness in East Asia with the long-term economic competition posed by China, Gallagher told POLITICO in an interview last week.

“We’re going to be looking big picture,” he said. “What are the immediate things we need to do in order to prevent World War III from breaking out over Taiwan? And then what are the long-term investments we need to make to win this new Cold War with Communist China.”

One issue likely to capture the committee’s attention soon is what to do about TikTok, the Chinese-owned video-sharing app with more than 80 million users in the U.S. The Biden administration is considering forcing its Chinese owner, ByteDance, to divest from the app, and Gallagher has introduced his own legislation to ban the app in the U.S. outright.

“I still think I can convince most Democrats that I’m right on TikTok and that we should ban TikTok,” Gallagher said last week, adding that he hopes he can solidify a new bipartisan consensus to be tough on China — similar to the U.S. stance against the former Soviet Union.

“There were brutal, meaningful differences and disagreements between the parties and within the parties in the first decade of the old Cold War,” he said. “But by and large, we were able to build out a foundation for containment that served us well over the course of the next four decades.”

For that to happen, Democrats say that the committee will have to stick to areas of bipartisan policymaking, and avoid swipes at the Biden administration, which has accelerated many of Trump’s tough-on-China policies.

“If it’s just a bipartisan effort, and it’s not your usual looking-for-conspiracy-theories and promoting xenophobia, then something good can come out of it,” McGovern told reporters. “I don’t know how they’re gonna behave, and we have to put good people on the committee and we’ll see.”