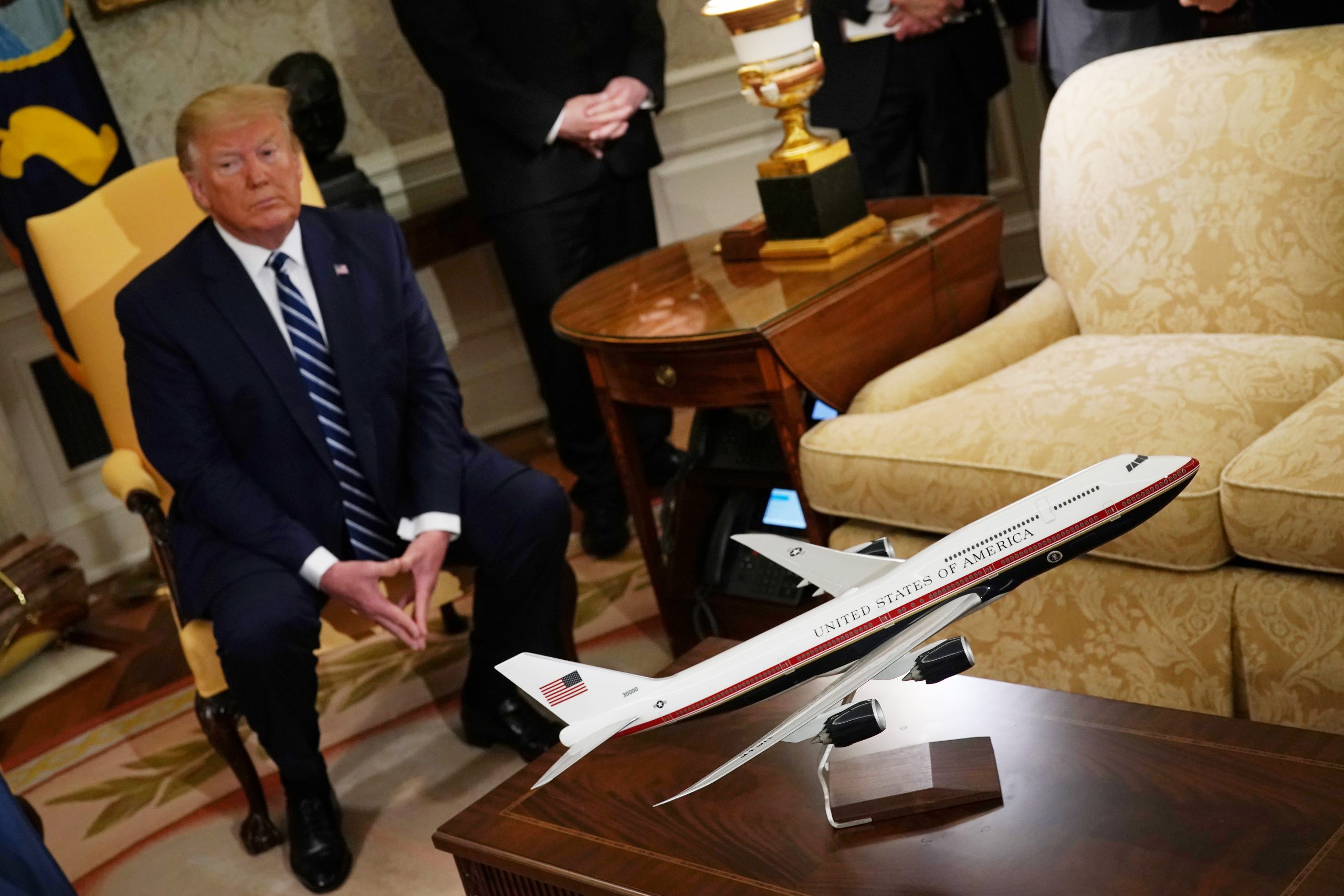 Former President Donald Trump sits in the Oval Office with a model of a proposed Air Force One plane on June 20, 2019, which calls for dark blue paint to cover the underside of the plane and its engines. | Alex Wong/Getty Images

Former President Donald Trump took a lot of heat for his controversial decision to replace the traditional Air Force One paint scheme with his signature red, white and dark blue. But no one quite expected this.

The Air Force says that Trump’s paint job could contribute to excessive temperatures on the plane, a problem that Boeing would likely have to pay out-of-pocket to fix.

The White House has yet to decide whether the next Air Force One will keep Trump’s plan or revert to the classic JFK-era light blue and white. If they go with the Trump colors, it could cost Boeing more money than the company has already lost — nearly $1.1 billion so far — converting two 747 aircraft into new Air Force Ones.

The Trump plan calls for dark blue paint to cover the underside of the plane and its engines. Because the scheme is darker than the traditional blue and white version, the plane may require modifications to cool some of its components, a person familiar with the discussion said. This person spoke on condition of anonymity to freely discuss options.

Air Force spokesperson Ann Stefanek confirmed the heat problem, but would not comment on whether a cooling modification is required if the White House opts for Trump’s red, white and blue.

“Further analysis concluded darker colors, among other factors, on the underside of the VC-25B aircraft might contribute to temperatures exceeding the current qualification limits of a small number of components,” Stefanek said in a statement.

Boeing referred questions to the White House, which declined to comment.

The new Air Force One’s paint scheme has been a subject of debate since Trump unveiled his plan to swap the iconic pattern for the new design in a July 2019 interview with ABC. The new scheme raised eyebrows at the time, since it bore a striking resemblance to Trump’s private 757.

“The baby blue doesn’t fit with us,” Trump told Fox News at the time. “I like the concept of red, white and blue and the classic, and I think it’s going to look much better actually.”

Martha Neubauer, a former Boeing engineer who’s now a senior analyst at AeroDynamic Advisory, agreed that Boeing may need to provide additional cooling for a darker color scheme, and at the very least conduct an analysis.

Neubauer said she knows of one Boeing commercial client that considered an all-black exterior for its planes and the team had to analyze whether the aircraft had enough cooling power.

The White House may make its decision on the paint scheme soon, said the person familiar with the discussions. If the administration opts to retain Trump’s red, white and blue livery, it’s likely to frustrate Boeing CEO Dave Calhoun, who told investors in April that company executives should never have agreed to Trump’s terms for the Air Force One contract four years ago.

The company consented to a fixed-price contract with the Air Force, meaning any changes made to the airplane are at Boeing’s cost, not the government’s.

Trump got personally involved in the negotiations for the replacement aircraft. In February 2017, he said the Air Force was “close to signing a $4.2 billion deal” and that “we got that price down by over $1 billion.”

Observers expect President Joe Biden to restore Air Force One to its classic color scheme for the two replacement planes.

The Air Force One replacement program continues to face delays due to supply chain problems and a Boeing dispute with a subcontractor. Fiscal 2023 budget documents show a new plane may not be ready to fly a president until 2026, at least two years late.

Also on Wednesday, the Government Accountability Office disclosed that Boeing is facing challenges in finding enough skilled mechanics to work on the aircraft, Defense One reported.