FTC turns up the heat on Trump-era defense merger 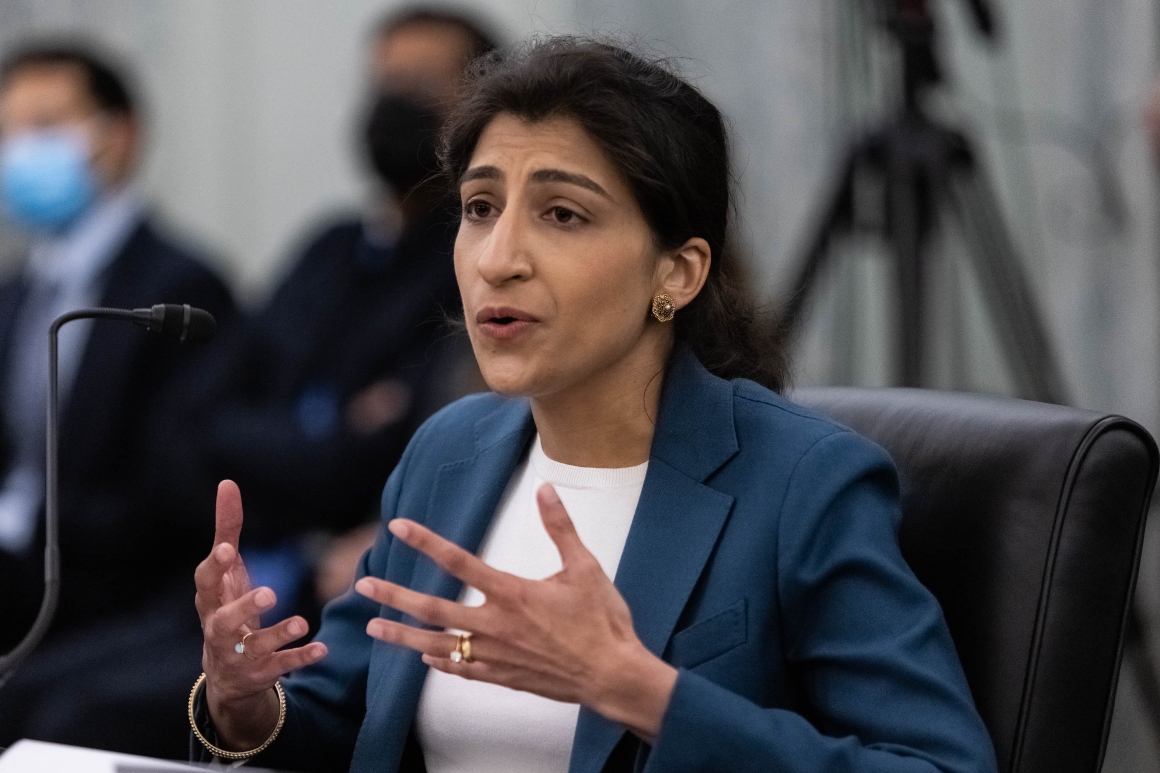 Under the Biden administration and the leadership of FTC Chair Lina Khan, an antitrust hawk, the agency’s staff lawyers are having second thoughts on the merger. | Graeme Jennings-Pool/Getty Images

The Federal Trade Commission is weighing whether to bring legal action against defense giant Northrop Grumman for alleged violations of a 2018 settlement that greenlit its purchase of the rocket, missile and satellite motor manufacturer Orbital ATK, according to two people familiar with the matter.

The FTC’s scrutiny of Northrop, which has intensified this year, raises the specter that the agency could seek to toughen the terms of the deal or even sue to unwind the merger. Such a move would send shockwaves through the defense sector, and mark a major milestone for President Joe Biden’s antitrust agenda, sowing doubt about both proposed and existing mergers across the economy.

“It would not just be a big deal; it would be a tremendous deal,” said Roman Schweizer, managing director at financial services company Cowen Washington Research Group, when asked about undoing the nearly four-year-old merger. “I would imagine this would be a highly contested decision both politically and legally.”

Four years ago, the FTC allowed the Northrop-Orbital merger to close despite objections from Boeing and other rival defense companies. At the time, Northrop promised fair treatment for all contractors that rely on rockets made by Orbital, a top concern among other companies. Orbital was one of only two solid rocket motor manufacturers in the country.

Now, under a new administration and the leadership of FTC Chair Lina Khan, an antitrust hawk, the agency’s staff lawyers are having second thoughts. In recent months, staff attorneys at the agency determined that Northrop violated the terms of the settlement by allegedly slow-walking negotiations to supply rocket motors to Boeing, and are weighing whether to take legal action, according to the two people who were granted anonymity to discuss confidential matters.

The scrutiny comes amid growing skepticism of defense mergers — and deals generally — at the commission. In February, the FTC forced Lockheed Martin to abandon its purchase of competing solid rocket motor maker Aerojet Rocketdyne, which was similar to the Northrop-Orbital purchase. Both Orbital and Aerojet make engines used for national security programs such as hypersonic and ballistic missiles.

Though such actions are rare, the FTC and the Department of Justice have at times sought to undo completed deals. The FTC is litigating to undo Meta Platforms’ 2012 and 2014 purchases of Instagram and WhatsApp. And in 2008, a federal appeals court upheld the agency’s victory in undoing a 2001 deal by the engineering firm Chicago Bridge and Iron. The Justice Department also unwound a merger between two online customer review companies in 2013.

However, neither the FTC nor the Justice Department has ever tried to undo a merger that took place as part of a negotiated settlement with the government.

Bill Baer, a fellow at the Brookings Institution and former head of the DOJ’s antitrust division under former President Barack Obama, said it would be “unprecedented” for the FTC to attempt to undo the deal — though in line with Biden’s aggressive antitrust stance.

While such a move would inject a great deal of uncertainty into the merger review process, “it can only reinforce the view that both Lina Khan and [DOJ antitrust head] Jonathan Kanter have expressed that these ‘conduct consents’ are often inadequate to address the concerns uncovered during their investigations,” Baer said, referring to settlements in which companies promise to change their behavior.

When Northrop bought Orbital in 2018 for $9.2 billion, it promised fair treatment of its rivals, including Boeing, for which Orbital was a key supplier. Since 2019, the FTC has been investigating whether Northrop broke those promises.

The commission’s probe was originally based on a complaint from Boeing, and has ramped up since the start of this year, the two people said, noting that discussions between the companies and agency staff are increasing in frequency.

As for the FTC’s next moves, Northrop representatives are still waiting to make their case to the five commissioners, who must ultimately vote on whether to sue. Commissioner meetings that had been scheduled for the spring were postponed, and have yet to be rescheduled, the people said. No final decision has been made and it is possible the FTC takes no action, they cautioned.

Boeing’s complaint about Northrop stemmed from a competition launched in 2018 to replace the Pentagon’s Minuteman III intercontinental ballistic missiles. At the time, both Boeing and Northrop were competing for the Ground Based Strategic Deterrent program, and both bids relied on motors made by Orbital.

Boeing, which ultimately dropped out of the competition, blamed Northrop for allegedly delaying negotiations that would have allowed Orbital to work with Boeing. Northrop maintains the negotiations were irrelevant because Boeing received the firewall agreement — in which Orbital employees dealing with Boeing were walled off from the rest of the Northrop business — far in advance of when Boeing’s bid was due, the people said.

Lawyers at the FTC’s compliance department have told commissioners they think Northrop is in breach based in part on conduct directed at Boeing, the two people said.

Boeing is not alone in expressing concern about the Northrop-ATK merger. After the settlement was announced in 2018, Raytheon Technologies, Aerojet and United Launch Alliance, which is a joint Boeing-Lockheed Martin venture, all wrote to the FTC opposing the deal. Last year, Sen. Elizabeth Warren (D-Mass.) voiced her concerns about defense sector consolidation to Khan, citing the Orbital deal. And in June, Reps. Mark Pocan (D-Wis.) and John Garamendi (D-Calif.) wrote the Defense Department urging it to cooperate with the FTC’s investigation.

It’s still unclear what the FTC would do to fix the problem if a court determines Northrop violated the agreement, the two people said.

The most drastic — and difficult to achieve — remedy would be to fully reverse the merger. The FTC could also seek civil penalties or try to get Northrop to turn over any profits stemming from anticompetitive bids. Less drastic measures could include extending the terms requiring Northrop’s cooperation with competitors beyond the 20 years outlined in the initial settlement, or adding a court-appointed compliance monitor.

Both the FTC and DOJ have said they harbor a deep skepticism when it comes to requiring companies to promise specific types of conduct to resolve concerns about mergers. When settling with the companies in 2018, the FTC said the Orbital deal would let Northrop hamstring competing missile contractors by making it tough or impossible to use the rocket motors it builds.

In its case against Lockheed and Aerojet in February, the FTC didn’t think that Lockheed could comply with a firewall remedy, according to a third person familiar with discussions. Violations of a settlement are nearly impossible to discover in real-time, the person added. Moreover, competitors can never be certain their confidential information will be protected, and even if issues arose, it would be too late to influence any bid.

“If the FTC seeks to unscramble the eggs, it will be a difficult task because presumably the assets, the people, the programs, have all been integrated,” Baer said. “But if they believe the prior decree is inadequate and being violated, then it’s their job to try and do it.”

The issue gets even more complicated for the FTC because the U.S. government is the only buyer of intercontinental ballistic missiles, said John Ferrari, a former director of the Army’s program and analysis evaluation office who is now a nonresident senior fellow at the American Enterprise Institute.

If the FTC does reverse the deal, it would be problematic for smaller companies such as Orbital and Aerojet, because the government doesn’t buy large enough quantities to keep them in business, Ferrari said.

But larger companies, such as Lockheed or Northrop, can cover for business sectors that are not receiving work from the government by moving money around, he added.

Ferrari said that if the U.S. government wants to have competition in this sector, there has to be enough work to keep both Orbital and Aerojet afloat and have the funding to innovate, or allow the smaller firms to consolidate under larger companies.

The Northrop-Orbital deal is particularly vulnerable because the FTC staff held their nose when the deal was approved in 2018, according to a fourth person with knowledge of the agency’s thinking. Yet the commission allowed the merger to occur after DoD approved it, the person added. While the FTC works closely with the Pentagon on defense deals, it does not need the department’s approval to take action.

And since then, the politics of mergers have changed.

Until recently, a partisan deadlock at the agency slowed down some of its investigations. Before Alvaro Bedoya was confirmed in May as the third Democrat on the FTC, the commission had been evenly split between the two parties. Though the commission’s two Republicans, Noah Phillips and Christine Wilson, joined the Democrats in voting to block the Aerojet-Lockheed merger, they might be more skeptical about unraveling a settled deal.

It’s unclear whether the Biden-era Pentagon would be willing to undo a merger, even though it has developed an increasing skepticism of defense industrial consolidation. And the possibility of Northrop being forced to sell Orbital could significantly destabilize a supplier to both the Pentagon and the Ukrainian military.

“Ripping two companies apart is very costly,” Ferrari said, “and if the FTC does that, who’s going to pay the bill? It will be the government.