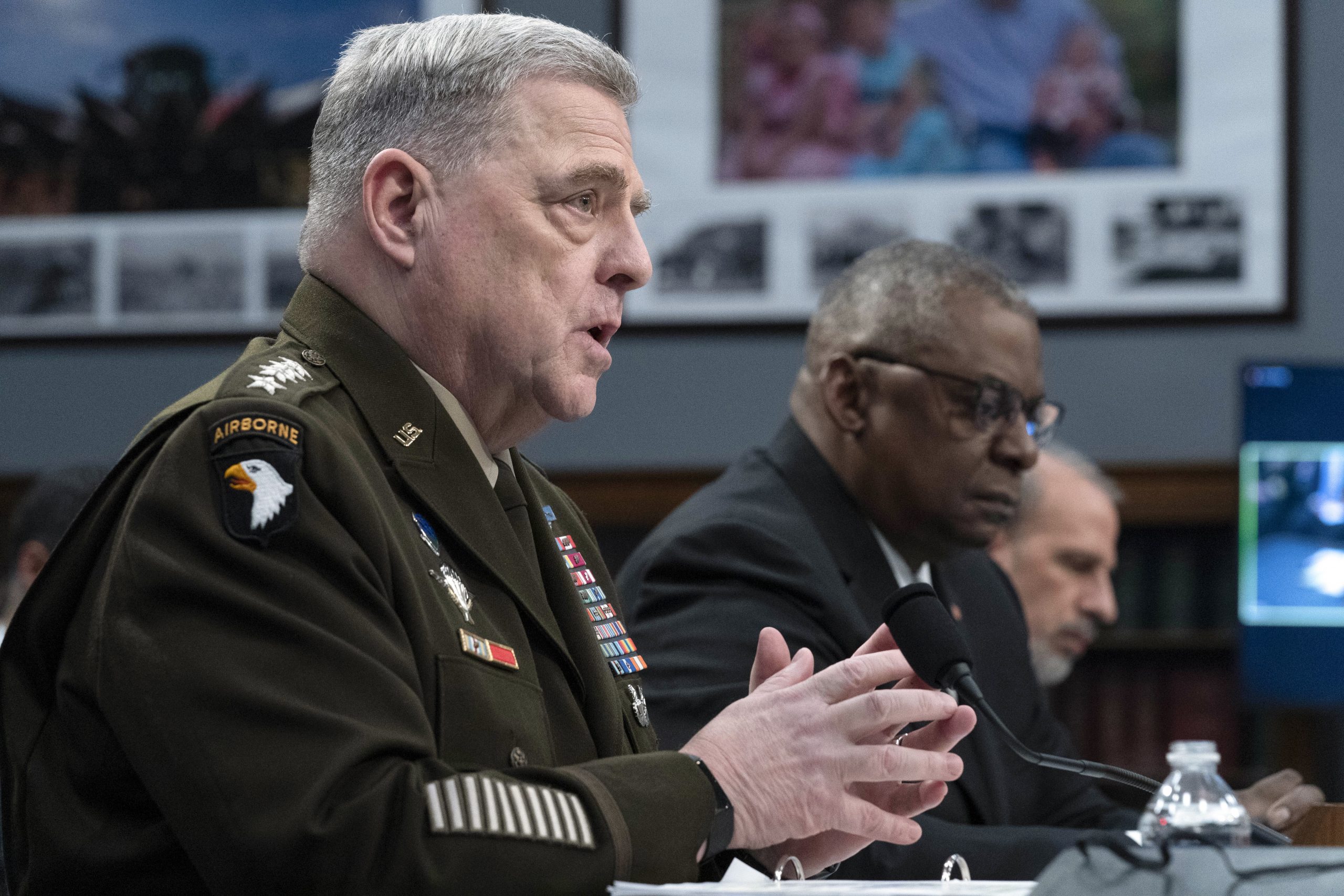 Joint Chiefs Chair Gen. Mark Milley, accompanied by Secretary of Defense Lloyd Austin, testifies before the House Committee on Appropriations Subcommittee on Defense during a hearing for the Fiscal Year 2023 Department of Defense, on Capitol Hill in Washington, D.C., on May 11, 2022. | Jose Luis Magana/AP Photo

Progressives were already disappointed with President Joe Biden’s plans for the nation’s nuclear arsenal. Now they’re poised to lose one of the few things about the White House’s blueprint that they liked.

In recent weeks, Democrats have joined Republicans in adding money back into the Pentagon budget to continue developing a sea-launched nuclear cruise missile that former President Donald Trump initiated in 2018. Biden proposed canceling the missile, which arms control advocates say is redundant, costly and potentially destabilizing.

Yet testimony from top military leaders, including Joint Chiefs Chair Gen. Mark Milley, in support of the missile prompted other Democrats to join Republicans in rebuking Biden’s plans.

“No one can tell in an uncertain world what we will need, but it’s important to keep this option available,” Rep. Jim Cooper (D-Tenn.), who authored the House proposal to keep the missile, explained during a committee markup in June.

The Pentagon’s still-classified Nuclear Posture Review, which lays out a long-term roadmap for the nuclear arsenal, spurred the decision to zero out funding for the missile in Biden’s most recent budget. The public split between top civilians and military commanders amounted to a “green light” for Democrats to hedge on the program, according to Tom Collina, policy director at Ploughshares Fund.

“If the president was making [the missile] a high priority, he’d tell the chairman of the Joint Chiefs of Staff to oppose the [missile],” Collina said. “So I think the administration made a decision that this simply wasn’t a high priority for them.”

“Once you have the administration saying one thing and the military brass saying something else, in this case, supporting continued development of the [missile] … then you’re not going to have the Democrats falling in line behind the system,” he said.

The situation marks a retreat from the campaign pledges of then-candidate Biden, who long advocated for reducing reliance on nuclear weapons, only to turn around and dedicate tens of billions of dollars to the modernization of all three legs of the triad for two years in a row. Arms control advocates also called on him to establish a “no first use” policy and cancel two weapons added on by the Trump administration: the cruise missile and a low-yield submarine-launched missile, which has already entered the fleet.

Biden’s nuclear plans, outlined in a brief summary released in March, omit a “no first use” policy. The low-yield warhead introduced during the Trump years remains a part of the arsenal.

As for the cruise missile, now that both the House and Senate Armed Services committees have authorized funding, albeit with differing conditions, Congress will likely send Biden a compromise defense policy bill this year that foils his plan to cancel the program.

A spokesperson for the White House National Security Council said in a statement that the administration “stands by the President’s budget submission, which canceled the SLCM-N,” which refers to the sea-launched cruise missile-nuclear. The spokesperson noted the decision to kill the missile “was based on the findings and recommendations” of the Nuclear Posture Review.

Biden’s fiscal 2023 defense budget proposes spending $50.9 billion on nuclear weapons programs across the Defense and Energy Departments, while also attempting to cancel the SLCM and retire the aging inventory of B83 gravity bombs. The latter system is also in play in defense talks.

Senate Armed Services voted to place limits on the retirement of the B83 by requiring a study on striking hardened and deeply buried targets before any of the bombs could be scrapped.

Both versions of the National Defense Authorization Act greenlight $25 million for the Navy’s research and development efforts on the cruise missile and another $20 million for the National Nuclear Security Administration to continue research on the W80-4 warhead to be used on the missile. But the House version bars any of the $45 million from being spent until the Navy and NNSA deliver several reports, including analyses outlining the cost of the warhead and delivery system as well as the possible limitations of the vessels that carry the missile.

A 2021 estimate by the Congressional Budget Office pegged the cost of the cruise missile at $10 billion through 2030. But proponents contend that the $45 million bill for the coming year — a small amount compared to the broader Pentagon and nuclear modernization budgets — is worth shouldering to preserve the program.

Advocates for the program argue that the benefits the missile provides, and the need to match gains made by China and Russia, outweigh high costs that have alarmed progressives and arms control groups.

Patty-Jane Geller, a senior policy analyst at the conservative Heritage Foundation, argues the weapon is crucial for the U.S. to deter its adversaries, especially in light of Russia’s invasion of Ukraine.

“If we were to keep our nuclear force posture the same then that’s essentially just ceding this advantage to Russia and China because as they build up, especially their regional nuclear capabilities,” Geller said.

Rep. Doug Lamborn (R-Colo.), one of the weapon’s strongest supporters, claimed the missile provides a “niche capability” and would help the U.S. counter many of the tactical nuclear weapons Russia already possesses. Lamborn and Cooper, who lead the Armed Services panel that oversees nuclear weapons, offered the amendment to preserve the missile.

“If you have the cruise missile from a submarine, that creates doubt in the minds of our potential adversaries and that doubt is good for deterrence,” Lamborn said at a Heritage event last month.

The debate won’t end with the Armed Services Committees, as Congress must still appropriate money to continue the program.

Democrats on the House Appropriations Committee sided with Biden and allocated no money for the missile or its warhead in their versions of annual defense and energy spending bills. But Armed Services’ action is likely to put pressure on appropriators in their talks over a spending compromise.

“It’s important. I think, obviously, that’s going to be a discussion in the conference committee.” Rep. Ken Calvert of California, the top House GOP defense appropriator, said in an interview.

“STRATCOM — give them credit — came out in favor of it,” Calvert added. “That kind of tells you where that’s at.”