China’s military exercises are an intel bonanza — for all sides 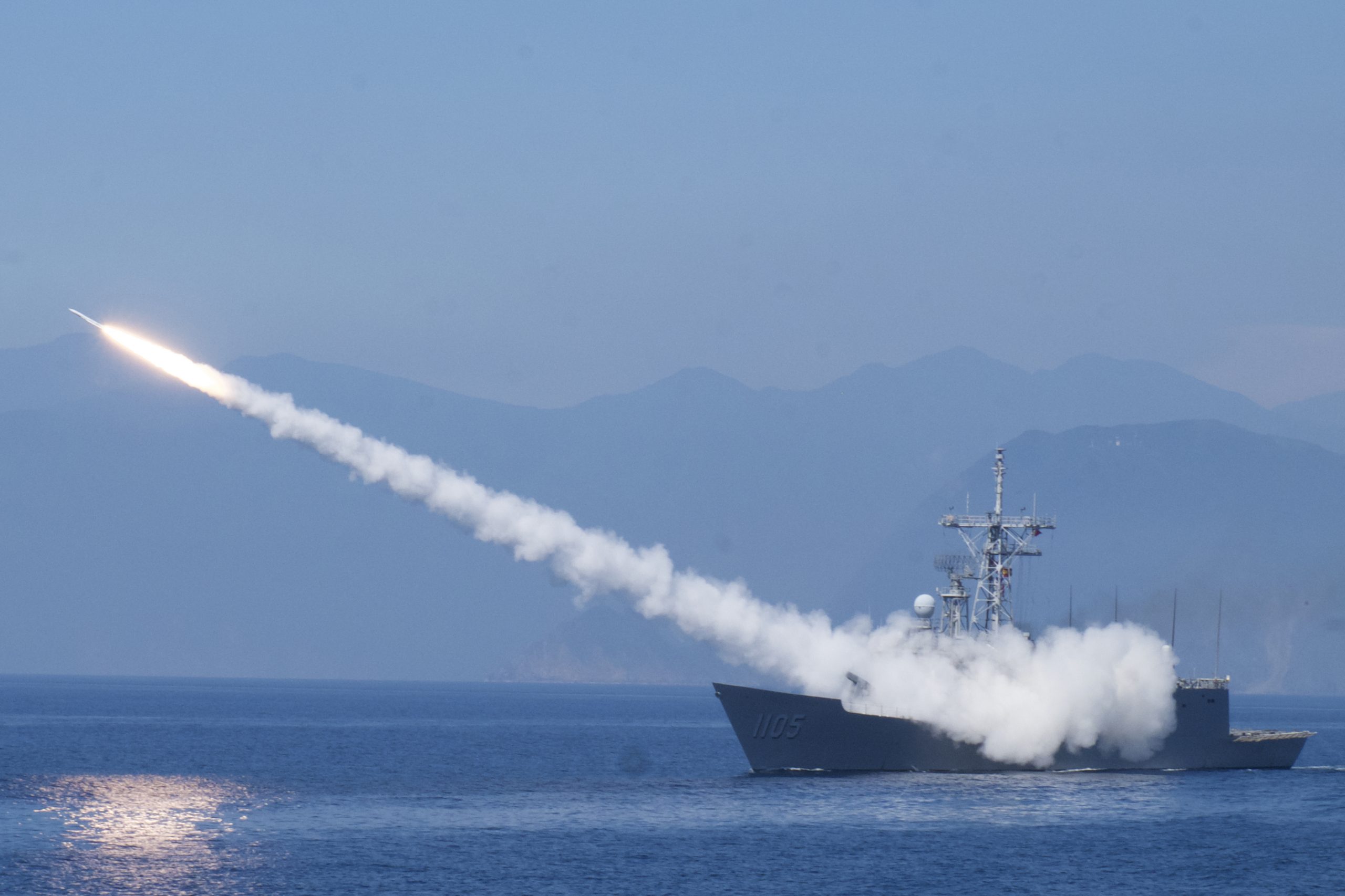 The dozens of warplanes flying daily over the median line in the Taiwan Strait and warships prowling the waters off the coast represent a significant and ominous change to the status quo. | Huizhong Wu, File/AP Photo

China’s massing of ships, aircraft and missiles near Taiwan is giving the U.S. a never-before-seen glimpse of how Beijing might launch a military campaign against the island. But China is also learning plenty of lessons that could eventually prove more important in how it plans for any future strike against the island of 23 million people.

For all of China’s military might, the People’s Liberation Army has limited real-world experience outside of highly-choreographed domestic military exercises and hasn’t fired a shot in anger since border scraps with Vietnam that ended in the 1980s.

That makes these quickly assembled exercises around Taiwan a critical test for Beijing. China has brought dozens of aircraft, 13 ships, missile batteries and their crews to bear in the last days, signaling an ability to deploy quickly, even if it’s close to home. Its ability to sustain those operations over time, if that’s what Beijing decides, will be a critical test for the military, and closely watched.

The dozens of warplanes flying daily over the median line in the Taiwan Strait and warships prowling the waters off the coast represent a significant and ominous change to the status quo, and one that could have enormous consequences for the defense of Taiwan in the future, experts and officials said.

Pushing those warplanes over the line not only erases the previous boundary, but doing so in coordination with warships and staying clear of the missiles flying in close proximity is exactly the kind of real-time interaction that modern militaries spend so much time and effort to perfect, and has famously confounded the Russians in Ukraine. Getting those systems aligned, while watching Taiwan’s reaction, would yield critical knowledge about both capacity and readiness for Beijing if it launches military strikes against Taiwan or American interests in the Pacific.

Chinese military planners are no doubt soaking up the reaction to their efforts, as Taiwan activates missile defense radars and moves troops and equipment around the island, giving Beijing key insights into how Taipei might react in time of war.

Previous Chinese drills have been “like driving a new car around a lot, as opposed to taking it out on the highway,” said Randy Schriver, who served as the Pentagon’s top Asia policy official in the Trump administration. “The coordinated bracketing of the island is the kind of exercise that will be more applicable to an actual strike.”

To this point, the United States has publicly held back, saying very little about the exercises while keeping its Japan-based USS Ronald Reagan carrier strike group in the region, but not close to Taiwan. The amphibious ship USS Tripoli is near Okinawa and the amphibious USS America is in the East China Sea. Both carry F-35 fighters.

More significant will be the glimpses into how China deploys and uses its forces. It will likely be a “bonanza of intelligence,” that could yield insights into “the strengths and weaknesses of PLA mobilization,” said Collin Koh, a research fellow at the Institute of Defence and Strategic Studies in Singapore.

Those peeks “would present a better picture of how the PLA may in future prosecute an invasion of Taiwan, or more generally how it would conduct a major military campaign,” than any long-planned exercise on the Chinese mainland ever could, Koh added.

Defense officials said the military is watching the exercises closely, but generally, they have remained quiet about the Chinese actions. White House National Security Council spokesperson John Kirby has said repeatedly this week that the U.S. isn’t looking for a conflict with China.

Secretary of State Antony Blinken, while traveling in Cambodia Friday, said “there is no justification for this extreme, disproportionate, and escalatory military response,” adding the Chinese moves “are a significant escalation” in the region.

While the Chinese military has tested its missiles for years, their launch crews have never worked in an operational scenario where they have to wrestle with the complexities of military and commercial air and sea traffic, and ensure their missiles can make it over populated civilian areas and land safely in designated waters.

Ahead of the live-fire exercises this week, Beijing unveiled a map of six zones where it planned to conduct the drills, forming a virtual ring around Taiwan. After the drills began on Thursday, the military launched at least 11 ballistic missiles, which splashed into the waters northeast, east and southeast of the island. Some landed in Japan’s exclusive economic zone, and one flew directly over Taiwan, an unprecedented action.

On Friday, China sent 30 fighter planes across the median line that cuts the Taiwan Strait in half, according to Taiwan’s defense ministry. The move “jeopardized the status quo of the strait,” the agency tweeted, noting that Taipei responded by scrambling aircraft and ships, as well as activating surveillance and anti-aircraft missile systems.

“We condemn such action that disturbed our surrounding airspace and waters and continue to ensure our democracy and freedom free from threats,” the ministry tweeted.

The drills may be designed as intimidation, but the highly choreographed and coordinated movements are much more complex than previous shows of force, Schriver said.

“This is several shots targeted at different closure areas timed in a particular way, so that more closely resembles if they were actually going to use missiles to strike Taiwan,” he said.

For the Chinese, the exercise is also a chance to find out whether Taiwan’s air defenses were able to pick up their missile launches, and how Taiwan’s civil defenses would respond to an attack, Schriver said.

“They would likely know, did Taiwan’s air defenses pick us up? Did they light us up with a fire control radar?” he said.

The drills have provided an opportunity to not just test whether their missiles can hit their targets in an operational scenario, but also whether China’s ships and planes can effectively blockade the island through their military movements.

The last time China made moves around Taiwan to this extent was in 1996, when Beijing fired missiles into the Taiwan Strait after being angered by Taiwanese President Lee Teng-hui’s visit to the United States to give a speech about the island’s democratization.

But the modernized Chinese military of today barely resembles the force of 1996, boasting of new missiles, the largest navy in the world, two aircraft carriers, and fighter planes that rival Taiwan’s F-16s and U.S. carrier-based jets.

“The PLA then couldn’t do any of this,” said Lonnie Henley, a lecturer at George Washington University and former defense intelligence officer for East Asia.

“The things that the PLA is doing are perfectly routine things for the PLA to do these days,” Henley added. “They’re just doing them all at once surrounding Taiwan, instead of doing them spread out over a period of a couple of months at a number of training zones throughout the East China Sea and South China Sea.”

But Taiwan hasn’t been sitting on its hands either over the past decades. For years it has purchased U.S. F-16 fighters and other equipment, and in late 2020 reached a flurry of arms deals with Washington for highly sophisticated systems meant to make the island a “porcupine” to better deter or withstand a Chinese invasion. The deals included four armed MQ-9B drones, eleven High Mobility Artillery Rocket Systems — the same weapon that Ukraine has made a household name — and Harpoon ship-killing missiles.

But Taiwan and the U.S. military are now seeing, for the first time, an indication of what they might soon have to fight.

Decades of carefully planned training exercises are vastly different from quick-moving military operations in unpredictable environments, and this latest crisis gives China its closest brush with the real world and its complications. The quick-reaction exercises “allows the PLA to put to test and validate the outcomes of its modernization” efforts and reforms carried out over recent decades,” Koh said.

“This latest Taiwan Strait crisis presents the opportunity to evaluate their capabilities and identify weaknesses to work on,” he added. “The PLA is likely to glean a lot about itself in the process.”