Armed drones for Ukraine? Not so fast. 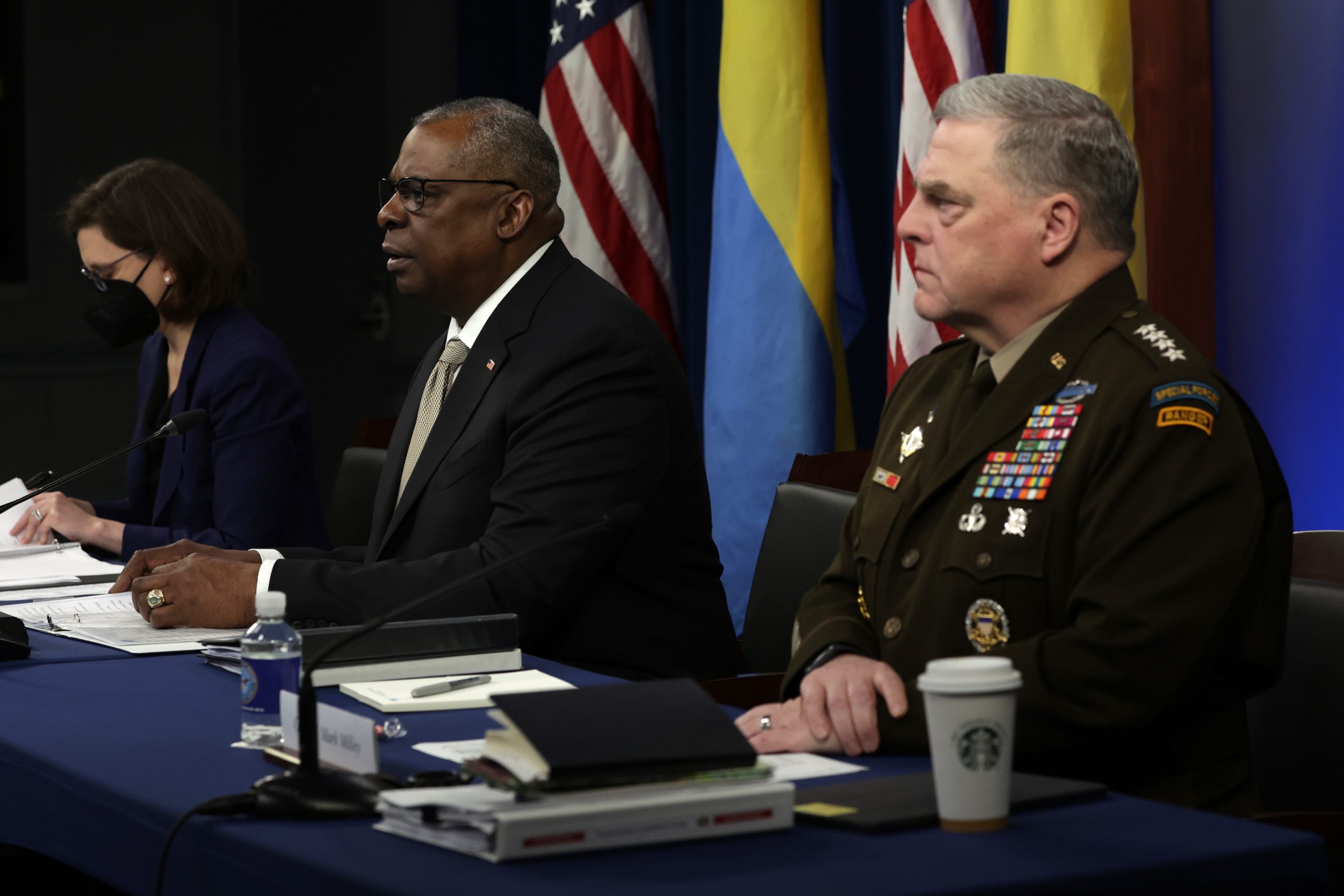 The Biden administration is wrestling with logistical and training issues as it weighs selling armed drones to Ukraine, two U.S. officials tell POLITICO, as leaders in Kyiv plead for the advanced weaponry amid Russian battlefield advances.

Even if the sale of four MQ-1C Gray Eagle drones goes through in the coming weeks, Ukrainian soldiers likely wouldn’t be able to use the systems on the front lines for weeks, maybe months, two DoD officials and experts said.

The potential move, which was first reported by Reuters, is not yet final, and could still be blocked by Congress or halted by a last-minute policy change. The issue continues to be discussed at the Pentagon and White House as new shipments of weapons and military aid are being planned and prepared in the coming weeks and months.

The possible sale of the Gray Eagles, the Army’s version of the better-known Reaper, represents a new chapter in arms deliveries to Ukraine and could open the door to sending Kyiv even more sophisticated systems. The Gray Eagle would be a significant leap for the embattled Ukrainians because it can fly for up to 30 hours, gather vast amounts of surveillance data, and fire precision Hellfire missiles. The system is also reusable, unlike the smaller Switchblade loitering munitions the U.S. has already sent to the front lines.

But training to operate the system typically takes months to complete, depending on what sensors and weapons packages are included, the two DoD officials said. The Gray Eagles are much more complex to operate than the smaller, short-range drones the Ukrainians currently operate, explained Dan Gettinger, an expert with the Vertical Flight Society.

Gray Eagles also require extensive ground infrastructure, including landing strips, and secure communications links and equipment, Gettinger said. It’s not clear where Ukraine would base the drones or the pilots, but the operators could theoretically fly them from outside Ukraine if they have access to satellite communications, he said.

The U.S. has more than 200 MQ-1s in storage that could go to Ukraine, said David Deptula, dean of the Mitchell Institute of Aerospace Power Studies and retired Air Force three-star general. He advocates declaring the drones excess to U.S. military needs and sending them to Kyiv “as soon as possible along with the appropriate weapons to arm them.”

“The gradualism that the Biden administration is following in arming Ukraine is hindering their defense,” Deptula said.

Deptula agreed that training could be boiled down to 4-5 weeks.

“The Russian-Ukraine war will go on far longer than originally anticipated, so there is plenty of time for training to effectively operate these aircraft,” Deptula said.

The fact that the deal is a foreign military sale, not a transfer from the presidential drawdown fund, also could hold up the process. Foreign military sales require official requests and are subject to approval by the State Department. They also require notification to Congress, which has 30 days to object.

“We have nothing to announce and we are not going to get into potential training timelines on pre-decisional issues,” Semelroth said.

The reality is, however, that Ukraine needs additional capability — now. In a Monday tweet, Mykhailo Podolyak, an adviser to President Volodymyr Zelenskyy, said Kyiv needs “heavy weapons parity” to end the war, specifically listing “1000 drones” as a key requirement.

Kyiv is pleading for additional aid as Defense Secretary Lloyd Austin is scheduled to huddle with his international counterparts on Wednesday during the NATO defense ministerial in Brussels. In what will be the third meeting of the Ukraine Contact Group, defense ministers from NATO and other allies will discuss how best to help the Ukrainian military — and likely make an announcement about new aid packages.

The meeting comes at a critical time in the fight, as the war has shifted even since the last meeting in late May. Russian forces are making incremental, but steadier gains in the Donbas, and Ukrainian officials have said their troops are being significantly outgunned by the long-range, and more numerous, Russian artillery pieces shipped to the front.

Officials in Kyiv, who have been quiet about their own losses in the war, have said in recent days that they are losing 100 to 200 troops a day to Russian shelling, and the disparity between the volume of artillery they can fire back is withering. “People say four to one, but the Ukrainians are telling the Pentagon it’s more like eight to one or 10 to one,” in favor of the Russians, one person who advises the Ukrainian government told POLITICO on the condition of anonymity.

The meeting on Wednesday in Brussels will be “an important opportunity to gather our growing group of partners from around the world to ensure that we’re providing Ukraine what Ukraine needs right now … in order to defend against Russia’s unjustified and unprovoked assault, and to look ahead to ensure that we’re helping Ukraine to build and sustain robust defenses so that Ukraine will be able to defend itself in the coming months and years,” Austin told reporters traveling with him on Monday.

Ahead of the meeting, Podolyak also noted on Twitter that Kyiv also needs 1,000 howitzers, 500 tanks, 2,000 armored vehicles, and 300 units of the Multiple Launch Rocket System. The last item is significant as the U.S. and the U.K. are providing rocket systems but only in limited numbers.

Colin Kahl, the Pentagon’s top policy official, said at an event hosted by the Center for a New American Security on Tuesday that it is “absolutely fair” to say that the four High Mobility Artillery Rocket Systems, or HIMARS, sent to Ukraine could be the first of more to follow.

“We’re going to provide the Ukrainians what they need to prosecute the targets inside Ukrainian territory,” Kahl said, suggesting the four rocket launchers are merely an “initial tranche.”

A top U.S. general recently hinted at a similar plan, suggesting the Biden administration could decide to send Ukraine additional HIMARS. The transfer of additional systems — which the Biden administration must explicitly approve — would be contingent on Ukrainian forces showing proficiency on the new artillery, Gen. Mark Milley, chair of the Joint Chiefs of Staff, told reporters last week.

“We’ve got to start this thing with a program that is rational and deliberate and gets them trained to a standard where they become effective,” Milley told traveling reporters, according to the Washington Post. “It will do no good to just throw this weapon system into the battle. You’ve got to be trained on it to get the maximum effective use out of the weapon as a precision system.”

As the Biden administration’s $40 billion military and humanitarian aid package passed last month by Congress suggests, few in Washington view the fight in Ukraine as the short, sharp engagement many predicted at the start of the year. And the shift in weapons from anti-tank rockets to longer-range rocket launchers, tanks, mobile artillery, and now perhaps armed drones, reflects that.

As of last week, Ukrainian soldiers were still completing training on the four HIMARS the U.S. is providing. Officials expected the training to wrap up within “days.” Meanwhile, the U.K. has promised to send three of its own M270 Multiple Launch Rocket Systems, a similar weapon.

The Ukrainian adviser said training on the HIMARS “is going much faster than the three weeks that people said they thought they’d need.”

Semelroth also declined to comment on HIMARS training or delivery to the front “due to operational security considerations.”

Lee Hudson contributed to this report.