Jurors made short work Friday of former Trump White House adviser Steve Bannon’s defense on contempt of Congress charges, returning two guilty verdicts against him after less than three hours of deliberation, including a lunch break.

The pair of guilty verdicts from a D.C. jury for Bannon over his defiance of a subpoena from the House committee probing the Jan. 6 attacks and former President Donald Trump’s campaign to overturn the 2020 election results are sure to grab the attention of other witnesses still resisting the panel’s requests or who may have given less-than-forthcoming testimony up to this point.

However, any actual jail time for Bannon in the case could be modest and may be years away. And the significant restraints the judge put on the defenses Bannon could offer at trial raise issues that could find traction at an appeals court or even the Supreme Court.

Here’s POLITICO’s look at the key takeaways from Bannon’s brief but attention-grabbing trial this week in D.C. federal court:

Perhaps the most central figure in Bannon’s conviction Friday and the key to his potential victory in any appeal is a long-dead Detroit mobster and bootlegger, Peter “Horseface” Licavoli.

Licavoli died almost four decades ago and spent time in federal prison on a colorful variety of charges, including tax evasion, bribery and trafficking in stolen art. However, it was his refusal to testify to Sen. Estes Kefauver’s 1951 hearings on organized crime that produced a legal precedent central to Bannon’s case.

A decade later, the D.C. Circuit Court of Appeals upheld a contempt-of-Congress conviction against Licavoli, ruling that he could not rely on his lawyer’s legal advice as a defense.

While the precedent was set 61 years ago, U.S. District Court Carl Nichols concluded it is still good law and, as a result, Bannon could not use the advice-of-counsel defense. The ruling also undercut Bannon’s ability to argue that executive privilege excused him from showing up in response to the subpoena.

However, Nichols said on several occasions before and during the trial that he thinks the Licavoli case may well be wrong under modern legal standards, but he was compelled to apply it anyway.

“I was bound by D.C. Circuit precedent that I’m not even sure is right,” the Trump-appointed judge said Thursday.

Now, Bannon’s lawyers will face the task of trying to get the decision overturned or deemed irrelevant, something that may require getting Bannon’s case in front of the full bench of the appeals court or even taking it to the Supreme Court. 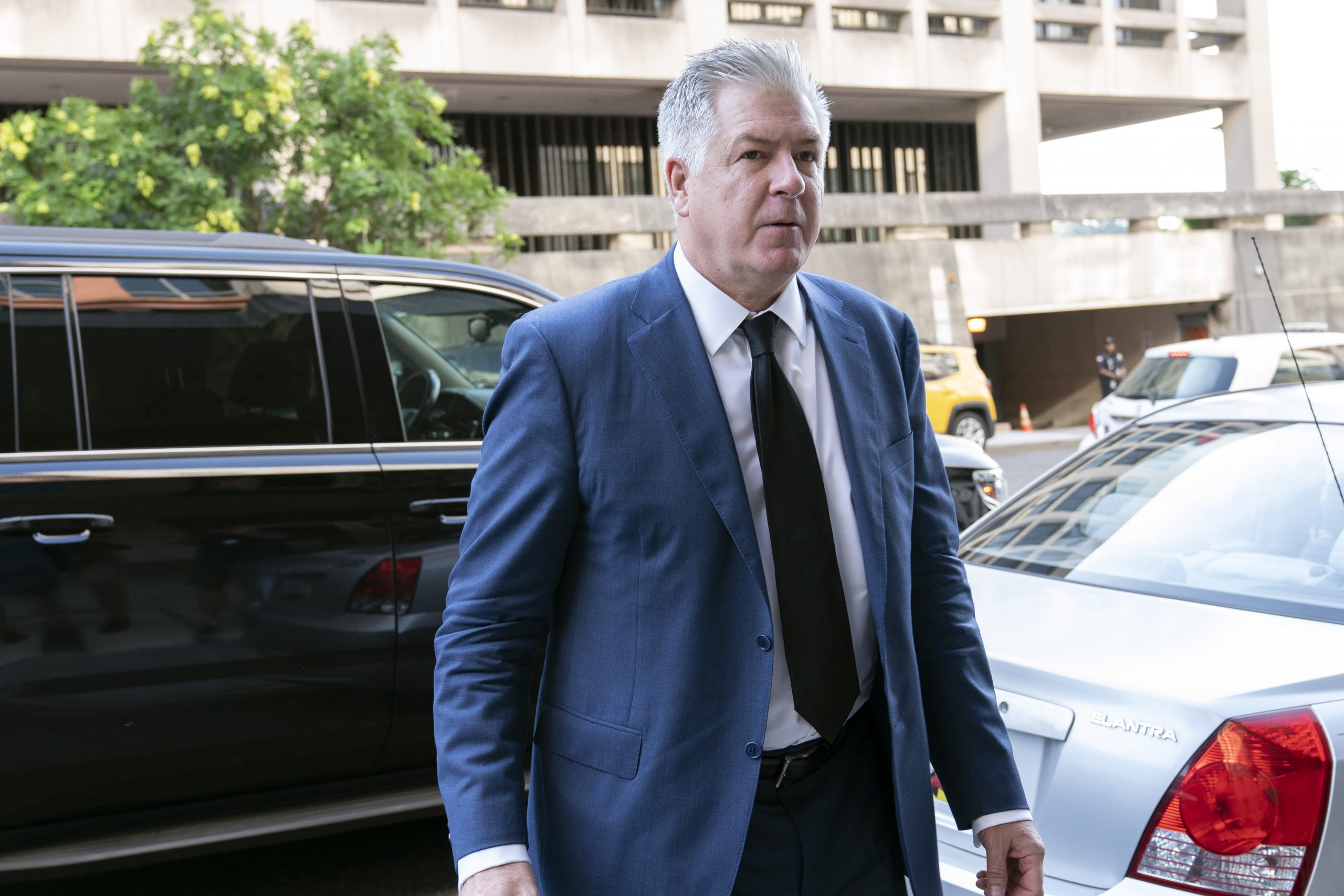 The judge’s ruling on that issue left the former Trump White House aide with little in the way of feasible defenses. He was left with slender and unsatisfying theories: he didn’t understand the deadlines on the subpoena or thought they were flexible because sometimes congressional committees negotiate with witnesses.

That left Bannon’s attorneys sometimes trying to grasp at out-there arguments, like the possibility that House Jan. 6 Select Committee Chairman Bennie Thompson’s signature on the subpoena might have been forged.

“You can ask yourself if one of those things is different than the other,” said defense attorney Evan Corcoran, displaying various Thompson signatures from other letters and from the subpoena to Bannon. “That could be a doubt as to the government’s case, a reasonable doubt as to whether Chairman Thompson signed this subpoena. … If you’ve got a doubt in your mind, you’ve got to give Steve Bannon the benefit.”

However, Bannon managed to get many of his arguments in front of the jury. They wound up seeing the entirety of letters in which Bannon lawyer Robert Costello argued for executive privilege. They also learned of a belated offer by Bannon, earlier this month, to testify under certain conditions.

Bannon said that move was prompted by Trump withdrawing his executive privilege claims, but prosecutors said the offer was a transparent effort to sow confusion on the eve of trial.

“This was a last-minute excuse, another excuse,” prosecutor Amanda Vaughn told the jury. “His haphazard attempt to get out of his contempt by pretending to comply now is a waste of everyone’s time.”

Nichols did tell jurors not to consider the executive privilege issue, but if there was a juror open to persuasion to Bannon’s side of the story, he or she had what she needed to piece that together. It appears there was no such juror.

Could Bannon have drawn any better D.C. judge?

Of all the judges who could have been assigned to Bannon’s case, Nichols seemed like about the best pick he could have hoped for. Only two of the 22 judges assigned to Jan. 6 criminal cases have publicly raised serious questions about the substance of some such prosecutions: Nichols and colleague Trevor McFadden. Both are Trump appointees.

Nichols is the first and only judge among the 22 to have thrown out felony obstruction charges in Jan. 6 on pretrial motions, concluding that the statute doesn’t cover the conduct alleged unless it was aimed directly at official documents, such as the paper electoral college certifications sent in by states.

The Justice Department has appealed those rulings. Every other judge to consider the issue has disagreed with Nichols.

Nichols also happens to preside over a series of civil defamation lawsuits related to 2020 election fraud claims, including cases the Dominion voting machine company brought against several Trump allies, including Sidney Powell, Rudy Giuliani and Mike Lindell. Last year, Nichols rejected their motions to dismiss the cases, making it more likely they will proceed to fact-finding.

Nichols was confirmed in 2019 and has been on the bench a little more than three years, so has limited experience presiding over trials, which were suspended in Washington federal court for more than a year due to the coronavirus pandemic.

At times, Nichols’ status as a criminal trial novice seemed to show through. The judge often seemed to defer or revisit rulings. And some typical courtroom formalities were not observed. It wasn’t clear why, for instance, Bannon wasn’t asked to stand when the verdicts were read. Or why the judge often left the bench before the jury rather than after it. But there was no sign those oddities affected the outcome of the trial.

Did Bannon get bad advice or the advice he was looking for?

What may have sealed Bannon’s prosecution and the guilty verdicts Friday was the all-or-nothing stand he and lawyer Costello took in their dealings with the House committee, refusing to produce any documents and failing even to appear on Capitol Hill in response to the subpoena.

Costello seems to have crafted or endorsed that strategy in the absolutist letters sent to the House committee, claiming not only that Bannon could not testify but that he was somehow legally forbidden from doing so even though he was a private citizen on Jan. 6 and in the months and years leading up to it.

Trump lawyer Justin Clark told prosecutors last month that while executive privilege issues were raised, he told Costello that Trump never instructed Bannon not to show up for a deposition or rebuff all document requests, a court filing in Bannon’s case said.

Notably, other witnesses who took more flexible positions seem to have escaped prosecution.

Former Trump White House Chief of Staff Mark Meadows and Trump social media guru Dan Scavino engaged in months-long negotiations with the select committee, haggling over the terms of potential testimony and the bounds of executive privilege. Meadows also turned over thousands of text messages and communications he had with members of Congress and other White House advisers.

The other Trump White House aide facing a contempt prosecution for defying the committee, trade adviser Peter Navarro, also took an absolutist position against compliance based on the notion that Trump was asserting privilege.

After the guilty verdicts were returned Friday, Bannon lawyer David Schoen seemed to concede that the legal advice Bannon got was open to debate, but Schoen insisted that Bannon should have been permitted to rely on it without opening himself to criminal prosecution.

With other arguments foreclosed, Bannon’s defense leaned hard in its closing argument on the notion that their client was the target of a vendetta by congressional Democrats.

“Right now, the president, the Senate and Congress are in the hands of one party — the Democrats,” argued Corcoran, in the first of a string of arguments that drew objections from the prosecution.

Corcoran, a former federal prosecutor who once worked as a top aide to Rep. Frank Wolf (R-Va.), also suggested Bannon might have been targeted in an effort to shut him up. “He has a show, a podcast on political topics and that has a very large following and it’s an election year,” the defense attorney said.

Nichols sustained the objections and later told prosecutors to ignore those defense arguments, but the political provocation seemed to encourage the prosecution to dispense with the appearance of complete neutrality and embrace their opportunity to tie Bannon to a better known figure highly unpopular with most Washington residents: Trump.

Trump fired Bannon from the White House in 2017. But in the prosecution’s final pitch to the jury, Vaughn made the two men sound like peas in a pod.

“How convenient that the former president chose to give the defendant an excuse for his defiance. The defendant stood with Donald Trump and that choice, the deliberate decision to stand with former President Trump, that is a choice,” Vaughn said.

But after the guilty verdicts came in, one of Bannon’s attorneys suggested prosecutors overreached with those sorts of arguments and created an opening to argue that the prosecution was explicitly appealing to the jury’s likely anti-Trump views.

Kyle Cheney contributed to this report.